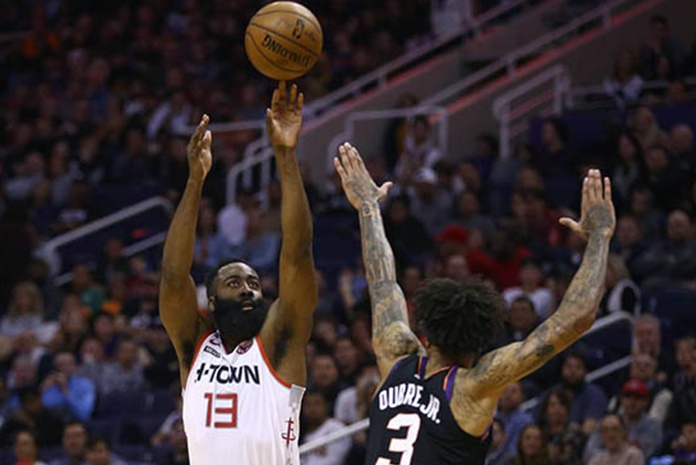 Devin Booker scored 30 points and the Phoenix Suns erased a double-digit deficit while their All-Star guard was on the bench with foul trouble, rallying for a 117-115 victory over the Dallas Mavericks

The Suns have won both games in the restart after coming in with the worst record in the Western Conference. They’re still long shots for the playoffs, while the Mavericks clinched their first postseason berth since 2016 by virtue of Memphis’ loss to San Antonio earlier in the day.

Luka Doncic had 40 points, 11 assists and eight rebounds for the Mavericks, whose hopes of moving up from the seventh seed are fading with an 0-2 start in the eight-game seeding round.

Russel Westbrook scored 31 points and the Houston Rockets used strong defense down the stretch for a 120-116 victory over the Milwaukee Bucks on the 3rd day of NBA Restart.

It was the 36th straight game with at least 20 points for Westbrook, who led Houston’s offense on a night James Harden scored 24.

Houston tied an NBA record for most 3-point attempts in a regulation game with 61, making 21 of them, and forced 22 turnovers.

Giannis Antetokounmpo had 36 points, 18 rebounds and eight assists for Milwaukee. He joined Kareem Abdul-Jabbar as the only players to have 15 games with at least 30 points, 15 rebounds and five assists in a season in the last 50 years.

Chris Middleton scored 27 points and Brook Lopez added 23 as the Bucks missed a chance to clinch the best record in the Eastern Conference.

Milwaukee led by one in the fourth quarter before Lopez scored the first four points of a 7-0 run that was capped by a 3 from Middleton to make it 112-104 with about 3 minutes remaining.

But Houston scored the next nine points, highlighted by a 3 and a steal from P.J Tucker and a block by Harden on Antetokounmpo, to go on top 113-112 about a minute later.

Lopez ended Houston’s run with a basket in the paint to make it 114-113 with less than a minute to go.

Westbrook made two free throws before a shot by Antetokounmpo left Milwaukee up 116-115 with 16.5 seconds remaining.

Westbrook made two more free throws and Danuel House stole a pass from Antetokounmpo and was fouled. He added two free throws to leave Houston up 119-116 with 14 seconds left.

Middleton missed two 3-point attempts after that to allow Houston to hold on for the victory.

The Rockets were up by two after a basket by Westbrook with about 1 1/2 minutesleft in the third quarter. Antetokounmpo and Kyle Korver hit late 3s to take a 90-89 lead into the fourth quarter.