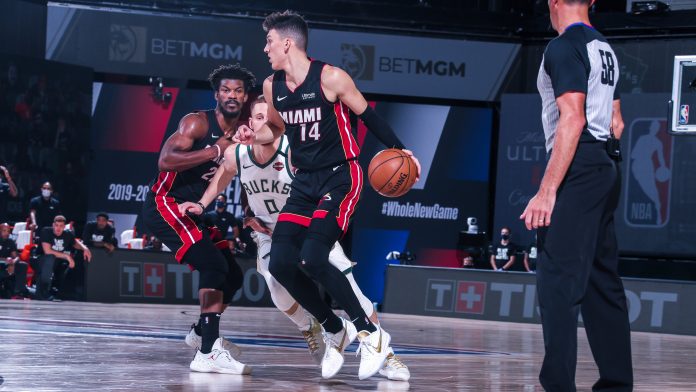 For the first time since 2014, the Miami Heat have entered the Eastern Conference Finals.

With a 103-94 Game 5 win over the Milwaukee Bucks, the Heat have earned a 4-1 series win over the team that posted the league’s best record for a second straight year.

The fifth-seeded Heat finished off an upset of the NBA’s best regular-season team Tuesday, topping the Milwaukee Bucks 103-94 in Game 5 of their East semifinal series — while Antetokounmpo, the league’s reigning MVP, couldn’t play because of a sprained right ankle.

Butler and Goran Dragic each scored 17 points for the Heat, who won the series 4-1 and will face either Boston or Toronto when the NBA’s final four gets underway next week. It’s Miami’s first time in the East finals since 2014, and the first time Butler has gotten this deep in the playoffs.

“It means a lot,” Butler said. “But that’s not my goal. That’s not my guys’ goal. That’s not the organization’s goal. We want to win `it.’ We want a championship and I think that’s what we’re focused on. These next eight are going to be much harder than the previous eight. We know that. But we’re ready for them.”

The decision to not let Antetokounmpo play came down about 45 minutes before game time.

Antetokounmpo did what he could — cheering from the bench throughout, rebounding for teammates during pregame warmups and again at halftime, offering words during time-outs.

And the Bucks were inspired from the jump.

But the NBA’s No. 1 overall seed in these playoffs — a league-best 56-17 in the regular season — just didn’t have enough. A very memorable ride ended, after a season where Milwaukee likely had a back-to-back MVP, the best record in the game and led a player boycott earlier in these playoffs to reiterate the primary mission of this restarted season, that being using the NBA platform to highlight a need to end racial injustice.

In the end, Miami just had a bit more. They became the lowest-seeded team to make the East finals since eighth-seeded New York in 1999.

“We want people to continue to count us out,” Butler said.