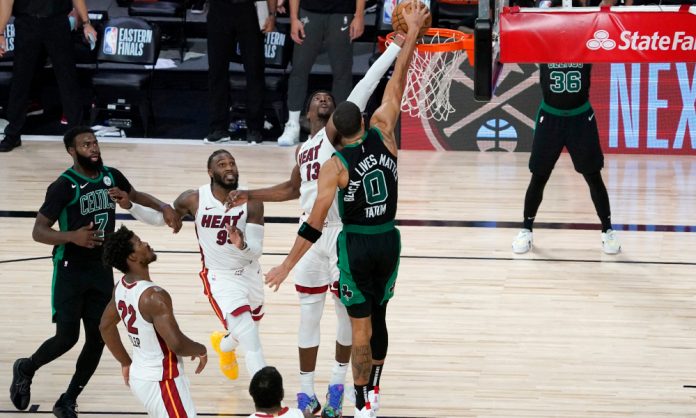 The Miami Heat bounced back in the second half to register 106-101 victory over the Boston Celtics and take a 2-0 lead in the NBA Eastern Conference finals.

It was Goran Dragic and Bam Adebayo who were outstanding for the Miami as they scored 25 points and 15 respectively in the third quarter.

But the Heat chipped away with a hook shot from Adebayo and a steal and dunk by Jimmy Butler.

Goran Dragic followed up two free throws with a three-pointer over Boston big man Daniel Theis that put the Heat ahead 100-95 with 1:42 remaining and Miami powered to the finish line.

On the other hand, Kemba Walker had 23 points for Boston, which got 21 apiece from Jaylen Brown and Jayson Tatum. Brown missed a corner 3 that would have tied it with 15 seconds left, and Butler sealed it with two free throws with 7.4 seconds remaining.

The unheralded Heat are now two wins away from the NBA Finals and they will try to take a stranglehold on the best-of-seven series in game three on Saturday in the NBA’s quarantine bubble in Orlando.

On the other hand, the Celtics will go into that one knowing that no NBA team has rallied from an 0-3 deficit to win a series.

Meanwhile, the Celtics had a loud, animated conversation in their locker room postgame, the walls unable to hold in the sound. They tried to downplay whatever was happening afterwards.

“It was nothing,” Walker said. “It was nothing.”
Added Tatum: “We’re frustrated. But that’s team sports. Not supposed to be happy we’re down 0-2. But that’s nothing out of the ordinary. Just talking about the game. It’s cool.”