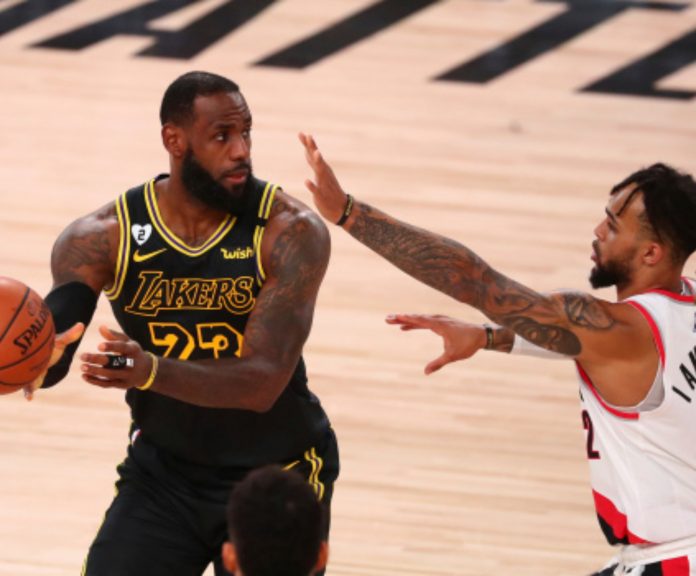 LA Lakers once again proved why they are known as a champion team. Lakers comfortably won their playoff series against Portland Trail Blazers to advance to the Western Conference Semi-finals.

In the Semi-Finals, Lakers will play the winner of Houston Rockets & Oklahoma City. The Rockets took a 3-2 lead with a 114-80 victory earlier on Sunday morning.

While the ultimate objective is to win a title, LeBron James said the Los Angeles Lakers achieved a key goal against the Portland Trail Blazers and it wasn’t simply to win the first-round playoff series.

“We got better throughout the course of the series,” James said. “We knew we were coming into a series versus a hot Portland team that was playing the best basketball inside the bubble along with Phoenix. So we wanted to just come in and try to work our game, get better and better as the games went on, as the series went on. And I believe we did that.”

James had 36 points, 10 rebounds and 10 assists and the Lakers advanced to the Western Conference semifinals, beating the short-handed Blazers 131-122 in Game 5 on Saturday night.

Anthony David had a playoff-best 43 points for the top-seeded Lakers in their first playoff appearance since 2013. The Lakers hadn’t won a playoff series since 2012.

The Lakers will play the winner of the series between Houston and Oklahoma City. The Rockets took a 3-2 lead with a 114-80 victory earlier Saturday.

The game was originally set for Wednesday night, but players collectively decided not to play in the three playoff games scheduled for that day to protest racial injustice following the shooting of Jacob Blake in Kenosha, Wisconsin. Games on Friday were also postponed.

James said he hopes the past few days made a difference.

“Obviously, the bubble season will never be forgotten. In sports this is the first time we’ve been able to do something like this, but this moment is so much bigger than us playing basketball,” James said. “Hopefully, years on down the line, when America is in a better place, you can look back to this moment and be like, that was one of the catapults that kind of got it going.”

Lillard injured his right knee in Game 4 that prompted him to leave the bubble in Florida and return to Portland to see team doctors. Lillard was named MVP of the seeding games heading into the playoffs, averaging 37.6 points and 9.6 assists in eight games.

Trent Jr. took his Lillard’s spot in the opening lineup. But because of injuries the eighth-seeded Blazers had just nine players available for the game.

“All you can do is hope to hang around and make it a fourth quarter game and win in the end, and we didnt quite win it in the end,” Blazers coach Terry Stotts said.

Portland’s lone win in the first-round series came in Game 1.