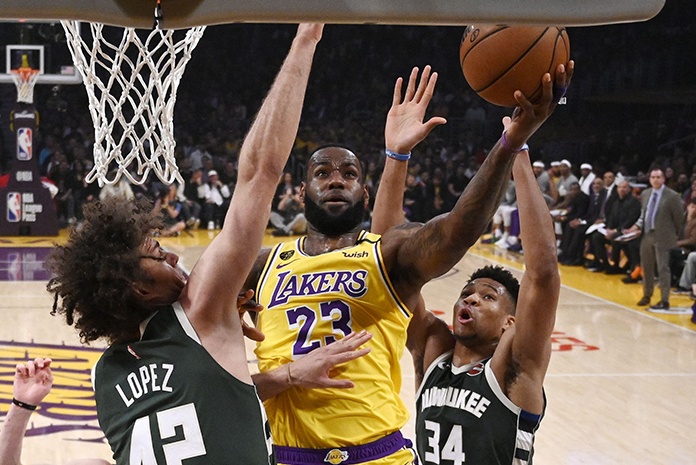 NBA playoffs are off to a very exciting start with some of the big favorites lost on the Day2 of the playoffs.

Damian Lillard had 34 points and the Portland Trail Blazers spoiled LeBron Jamesfirst playoff appearance for the Los Angeles Lakers with a 100-93 victory on Tuesday night in Game 1 of the teams’ playoff series.

James had 23 points, 17 rebounds and 15 assists for this 24th postseason triple-double. His assists were a career playoff high.

Jusuf Nurkic had 16 points and 15 rebounds for Portland, which led by as many as 16 points in the first half. The Lakers narrowed the advantage to 57-56 at the break and stayed close the rest of the way.

Trailing 78-75 going into the final period, the Lakers tied it at 78 on Kyle Kuzma’s 3-pointer. James’ layup gave Los Angeles the lead, and Kuzma added a pair of free throws and another layup to extend it to 84-78.

Lillard’s 3-pointer tied it at 87 with 5:46 to go and CJ McCollum’s floater gave Portland the lead.

After Danny Green’s layup tied it again for Los Angeles, Lillard nailed a 3-pointer. Anthony Davis dunk got the Lakers within 95-93, but Gary Trent Jr. made a 3-pointer that put Portland up 98-93 before Nurkic dunked to all but seal it.

Portland won the first play-in postseason NBA game since 1956, beating Memphis 126-122 on Saturday to make the playoffs for the seventh consecutive season. The Blazers were among three teams with losing overall records to make the bubble playoffs. No team below .500 had advanced to the postseason since 2015.

The Milwaukee Bucks hopes of winning their first NBA title since 1971 got off to a rocky start.

Nikola Vucevic scored a playoff career-high 35 points and had 14 rebounds, and the Orlando Magic stunned the top-seeded Bucks 122-110 on Tuesday in the league’s fan-free Disney World bubble.

Terrence Ross scored 18 points, Gary Clark added 15 and D.J. Augustin had 11 points and 11 assists for the eighth-seeded Magic, who were 14-point underdogs.

Orlando took a 1-0 lead in the best-of-seven series, an intriguing result given that the Bucks can’t rely on home-court advantage in these pandemic-altered playoffs.

“We don’t care what other people have to say,” Vucevic said. “We focus on ourselves and we came out and played a great game on both ends of the floor.”

James Harden had 37 points and 11 rebounds, and the Houston Rockets rolled past the Oklahoma City Thunder 123-108 on Tuesday in Game 1 of their first-round Western Conference playoff series.

Houston All-Star Russell Westbrook, who played his previous 11 years with the Thunder, was out with a quad injury. The fourth-seeded Rockets still made 20 3-pointers and shot 48% from the field.

Jeff Green scored 22 points and Eric Gordon added 21 for Houston, which isn’t sure how long it will be without Westbrook.

Danilo Gallinari matched a playoff career high with 29 points for the fifth-seeded Thunder. Chris Paul, who joined the Oklahoma City in the trade that sent Westbrook to Houston, finished with 20 points, 10 rebounds and nine assists. Steven Adams added 17 points and 12 rebounds.

Gordon scored 16 points and Harden had 15 in the first half to help the Rockets take a 68-52 lead. Oklahoma City cut its deficit to 10 at one point in the third quarter, but the Rockets pulled away and led 104-83 heading into the fourth.

Jimmy Butler does plenty of talking on the court to anyone who will listen: opponents, referees or teammates.

Luckily for the Miami Heat, on Tuesday Butler also listened.

Bam Adebayo has been imploring him to shoot 3-pointers, and Butler knocked down two big ones late in the fourth quarter to help the Heat pull away for a 113-101 victory over the Indiana Pacers in the opener of their Eastern Conference first-round series.

“I yell at him all the time to shoot the ball,” Adebayo said of Butler, who hadn’t made a 3-pointer since March 2.

“Tonight it just clicked where he listened to me and he made some big 3s.”

Butler scored 28 points and Goran Dragic had 24 for the Heat, who pulled away in the closing minutes, long after the Pacers had lost star guard Victor Oladipo to an eye injury.

Adebayo had 17 points, 10 rebounds and six assists for the Heat, who were just a little bit better in a mostly even matchup between the Nos. 4 and 5 seeds, who were separated by a game in the standings in this pandemic-shortened season.