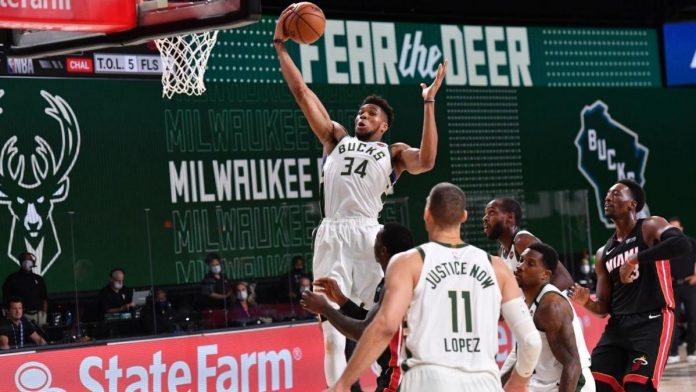 Jimmy Butler made two free throws with no time remaining and the Miami Heat wasted a six-point lead in the final seconds yet found a way to beat the Milwaukee Bucks 116-114 on Wednesday night for a 2-0 lead in the Eastern Conference semifinal series.

Butler rattled in the first, which was the only one that mattered, then made the second for the final margin. He got fouled by Milwaukee’s Giannis Antetokounmpo with about a tenth of a second left on a jump shot from the left corner.

Referees sent Butler to the line, with no one else on the lane, as some Heat teammates knelt at midcourt.

And just like that, the Heat became the first No. 5 seed in NBA history to take a 2-0 series lead over a No. 1 seed.

“I knew I was going to make one,” Butler said. “That’s all that we needed.”

Goran Dragic scored 23 points, Tyler Herro added 17 off the bench and Jae Crowder had 16 for Miami.

Bam Adebayo scored 15 points, Butler and Duncan Robinson each had 13 and Kelly Olynyk added 11 for Miami — which is 6-0 in this postseason.

Antetokounmpo had 29 points and 14 rebounds for the Bucks, who were down by six with 27 seconds left and tied it. Khris Middleton scored 23 points for Milwaukee, the last three of those coming when Dragic was called for fouling him with 4.3 seconds left.

Milwaukee got 16 apiece from Brook Lopez and Eric Bledsoe and 14 from George Hill.

Miami’s lead was 90-86 entering the fourth — and Milwaukee had the lead back on the very first possession of the final quarter.

Middleton was fouled on a 3-point try, made the first two free throws and the rebound of the third was controlled by the Bucks. Kyle Korver made a 3-pointer off that rebound to cap a five-point possession for Milwaukee, which had the lead again for the first time since 14-13.

Milwaukee shot 21 free throws in the first half to Miami’s 11 — but oddly, it was the Bucks who had players in foul trouble at the break.

Middleton got his third foul only 26 seconds into the second quarter and Antetokounmpo was whistled for his third with 4:17 left in the half. Both played for a bit more in the quarter, then were pulled with 1:07 left with the Bucks no longer willing to risk either of them getting a fourth so early.

The free throws were a big factor: Miami shot 55% in the half and made nine 3s, but the lead was just 66-60 at intermission.

Antetokounmpo was called for his fourth early in the third, when Butler took a charge — or so it seemed. The call was overturned after review, so the reigning MVP had the fourth foul wiped away.

And the physicality only kept rising. Adebayo was knocked to the floor multiple times in the third quarter alone, one of them reviewed to see if it met flagrant status; it didn’t, but that review showed referees enough to hit Butler with a technical foul.

Late in the third, Kyle Korver closed out too aggressively on a 3-point try by Andre Iguodala, who landed on his foot and turned his right ankle. A Flagrant-1 was called, Iguodala limped to the line to make two of three free throws, then limped away for evaluation.

Heat: Dragic has scored at least 20 points in six consecutive playoff games. It’s the 12th such streak in Heat history; Dwyane Wade had six, LeBron James had the other five. … Butler, who had 40 points in Game 1, didn’t get to the 10-point mark in Game 2 until 3:32 remained.

The Bucks made only four 3-pointers in the first half — but really had 18 points from beyond the arc, not 12. Miami fouled Lopez on 3-point tries twice in a 26-second span of the first quarter (he made two of three free throws on the first, turned the second into a four-point play) and fouled Korver on another 3-point attempt early in the second quarter. Korver made all three free throws.