NBA All Star Game 2021: 10 key takeaways from the 2021 NBA All-Star Game. From viral deep 3-pointers by Steph Curry and Damian Lillard to Giannis’ perfect night, here are the standout moments from Team LeBron vs Team Durant.

The NBA put on a compressed edition of the 70th All-Star weekend, but with that in the rearview, it’s time to focus on the stretch run of the regular season.

Before we start on that journey, let’s take a look back at 10 standout moments of NBA All-Star 2021 in Atlanta.

Originally instituted at the 2020 All-Star Game, the contest’s new format failed to deliver the ultra-competitive fourth quarter we saw last season in Chicago.

But Damian Lillard gave us a little something to remember by sending Team Durant home with a half-court jumper to close out the game.

Both Lillard and Curry provided plenty of evidence throughout the night of their lethal range that we’re sure to see again once the second half of the regular season commences.

Welcome back. After Curry won his second 3-point contest with 28 points in a final round in which he edged Utah Jazz guard Mike Conley, we caught a display of more joy in the first half of the actual All-Star Game.

Curry knocked down six 3-pointers in the first half, including one where he turned around toward the bench before it splashed, and another in the first quarter from the “T” in the midcourt All-Star Game logo. Curry also caught an alley-oop for a two-handed dunk.

The All-Star Game generated in the neighborhood $3 million for Historically Black College and Universities, through donations of scholarship funds. The league also made sure that HBCUs were well represented throughout the night.

From utilizing officials that are HBCU alums to the bands from Grambling State University and Florida A&M University playing during the player introductions, as well as the court design — which represented the academic significance and the spirit of HBCUs — the world caught a beautiful glimpse of the HBCU experience.

Admit it, you smiled and probably chuckled a little when Team LeBron and Team Durant tipped off the second quarter with guards Chris Paul and Mike Conley at center court for the jump ball.

They had no idea of what they were doing, and that’s what made it so fun to watch.

For the second year in a row, big men ran the show at the Taco Bells Skills Challenge, as Indiana’s Domantas Sabonis walked away with the trophy from a field that included Julius Randle, Luka Doncic, Nikola Vucevic, Robert Covington, and Paul.

Thank you, NBA, for such a nice gesture to honor our good friend Sekou Smith, a Jackson State University alum, who represented the very best of all of us.

Smith was the face of NBA.com, and surely, he was smiling down big at his adopted home of Atlanta. We miss you tremendously, boss.

In honor of our friend. We saved you a seat.

We miss you Sekou. pic.twitter.com/AHwOl75KGV

The people responsible for all the music throughout the TNT broadcast of the All-Star Game should be applauded because they certainly showcased all of the talent coming out of the city of Atlanta over the years. 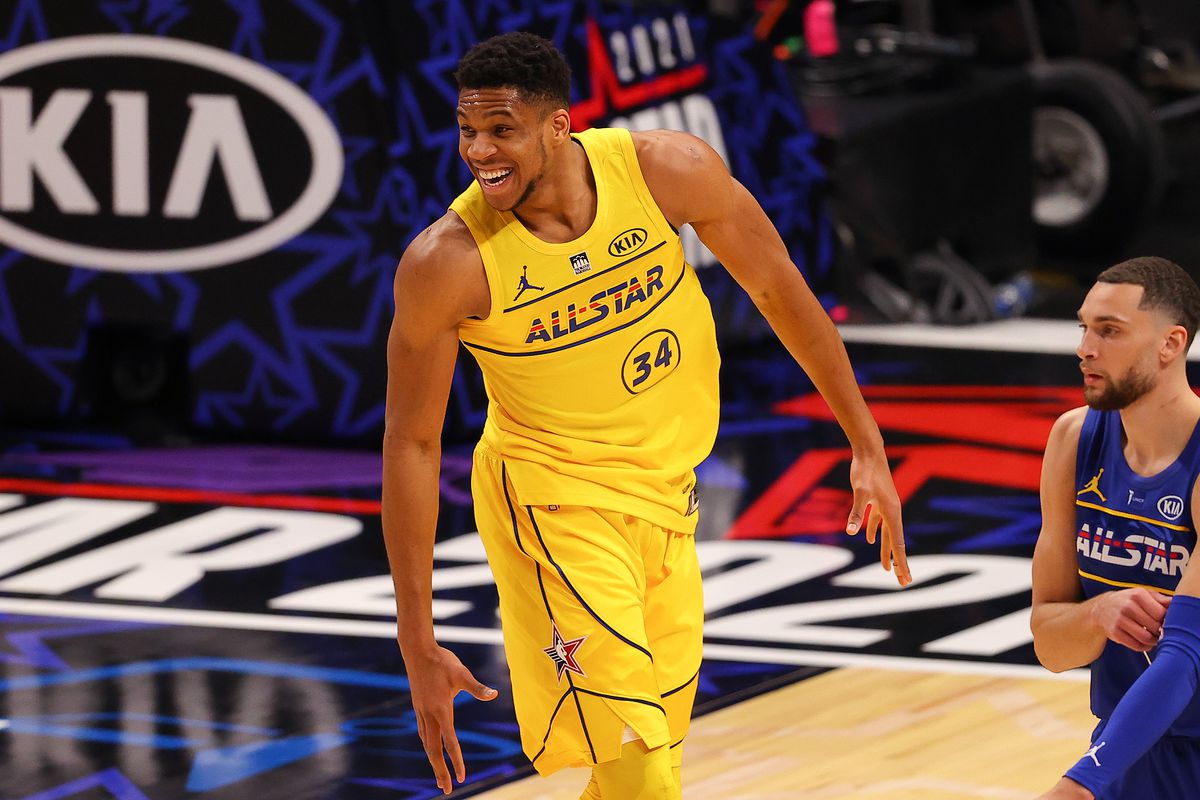 It was also great to hear from so many people representing the city during the broadcast; people such as Ludacris, Quavo, Killer Mike, 2 Chainz, Mayor Keisha Lance Bottoms, and Renee Montgomery, new part-owner of the Atlanta Dream, as well as many others.

NBA All Star highlights: A strong week for Gladys Knight

Seven-time Grammy Award-winner Gladys Knight, a graduate of Shaw University, belted out a soulful performance of “The Star-Spangled Banner” to start off the All-Star Game.

Seven-time GRAMMY Award winner @MsGladysKnight, who graduated from @ShawUniversity, one of the oldest HBCUs in the nation, performs the U.S. national anthem at NBA All-Star 2021.

The performance certainly capped off a great week for Knight. Four days prior, “Coming 2 America”, the sequel to 1988 classic “Coming to America,” dropped on Amazon Prime. The 76-year-old makes a cameo appearance during the sequel, in which she sings a beautiful, yet hilarious parody of her hit song “Midnight Train to Georgia”. She’s definitely still got the singing pipes.

LeBron James is the king of ASG

For four years now, James has been a captain for the NBA All-Star Game, and his teams are a perfect 4-0 against teams captained by Kevin Durant, Giannis Antetokounmpo and Curry.

The perfect night for Giannis

Antetokounmpo captured his first Kobe Bryant NBA All-Star Game Most Valuable Player Award by scorching the nets for a perfect 16-of-16 shooting night. Antetokounmpo lucked out by knocking down a few shots off the glass, but the bank always stays open for the Bucks’ star, apparently.

“You know, usually it is closed [on Sunday], but for me, it was open extended hours,” Antetokounmpo joked.

Europa League: Napoli vs Leicester City: How to watch live streaming of NAP vs LEI in your country, India?