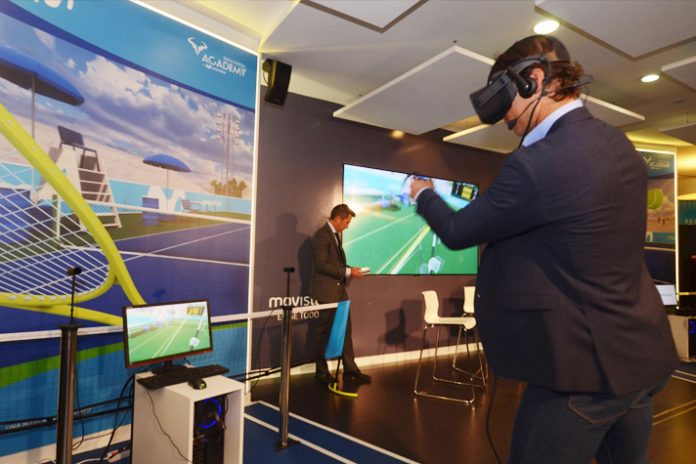 The virtual world creates opportunities worth realizing the wildest dreams. The latest one is for the Rafael Nadal fans who wished to challenge the King of Clay on the court. And for the ones who lived with the bigger ambition to see how Nadal would fare against Nadal on a clay court.

Nadal Challenge, the virtual reality game created by the Spanish telecommunications company Telefonica in association with its subsidiary Movistar, gives Nadal fans an opportunity to test their skills against the legend himself. Those fortunate, also witnessed the Legend Nadal taking on the Virtual Nadal in Madrid, Spain.

The game, using a stereoscopic 360-degree video of Nadal accompanied by the 3D modeling of 300 photographs to create the virtual reality environment, presents real-time situations and objects to create an effect of playing on an actual tennis court.

The challenge also works as a marketing tool for Nadal’s tennis academy. “I would say that it is the most important professional and vital project of my career; it is very special for me,” Nadal said in a statement. “The Academy is a training center for athletes where they are given all the possible opportunities so that they can reach their maximum potential, and is equipped with the latest technology applied to sports. That willingness to use the latter is something we share with Telefónica.”

“The Rafa Nadal Academy by Movistar was born with the latest technology applied to sport and trains young talent through the experience of Rafa and his team, combined with innovative training systems,” sporttechie.com has quoted Francisco de Bergia, Telefonica’s director of public affairs, as saying. “In 2016 we launched an international call focused on finding startups that will develop technological solutions for the Rafa Nadal Academy by Movistar, in which more than 160 startups from Asia, Europe, North America, Latin America and Oceania participated.”