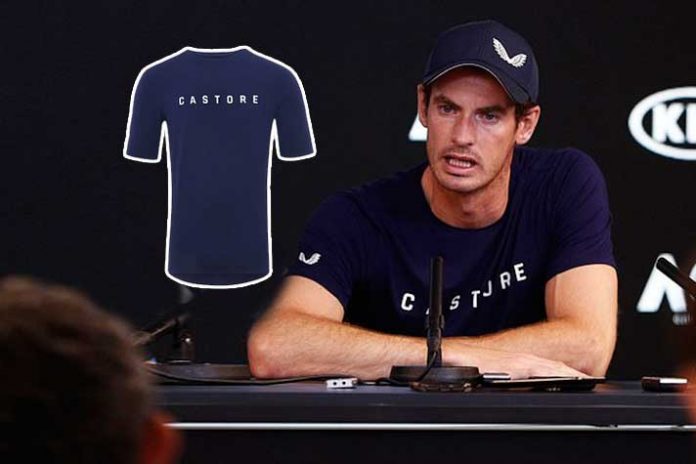 Former World No.1 Andy Murray has confirmed that he will be wearing British sportswear brand and his new kit partner Castore at the 2019 Australian Open in Melbourne.

At the pre-tournament Press conference, an emotional Murray had hinted that the Melbourne Park Grand Slam could be the final tournament of his ATP career.

News of the Scot’s new sponsorship deal came amid developments overnight in Australia where the three-time Grand Slam winner announced that he plans to retire this year, having struggled with a debilitating hip injury, despite a surgery 12 months ago.

The 31-year-old had attended the Australian Open Press conference in a  Castore’s Johansson T-shirt and Ghost Cap.

Castore replaces US Brand Under Armour, which Murray had been with since signing a four-year apparel sponsorship deal in 2015. Murray’s relationship with Under Armour had ended last.

Commenting on his new deal, Murray said, “I am a fan of the Castore brand and have been following their progress for some time.

“As my next kit partnership will potentially be my last one, I want to wear the very best products. I’ve been testing a range of different kit including Castore, the British sportswear brand, and really like their stuff.

“We have been discussing potential opportunities to work together, and I will be wearing Castore for Australia and remaining on court appearances as I have been so impressed by their quality from my testing in training.”

Tom Beahon, co-founder of Castore, added, “We are delighted that Andy has chosen to wear Castore for the Australian Open.

“The most successful British tennis player in history choosing to wear our products to help his performance is a real privilege and really underscores the superior quality of Castore products.

“We create sportswear that helps make athletes perform better and it is fantastic that Andy rates our products so highly. Andy is a huge inspiration to athletes all over the world and is perfectly aligned with our brand ethos of Better Never Stops.”

In the meantime, the sports industry has been reacting to the shock news of Murray’s planned exit from the game.

Adam Hogg, Event Director at the Nitto ATP Finals, tweeted: “An incredible athlete and ambassador for the sport. Hope he gets the send-off he deserves.”

Whilst former Sports Minister Tracey Crouch said: “He’s such a phenomenal competitor in an era of other great players, a champion for equality in sport and a genuinely nice guy. I think his legacy of inspiring the next generation will live long.”