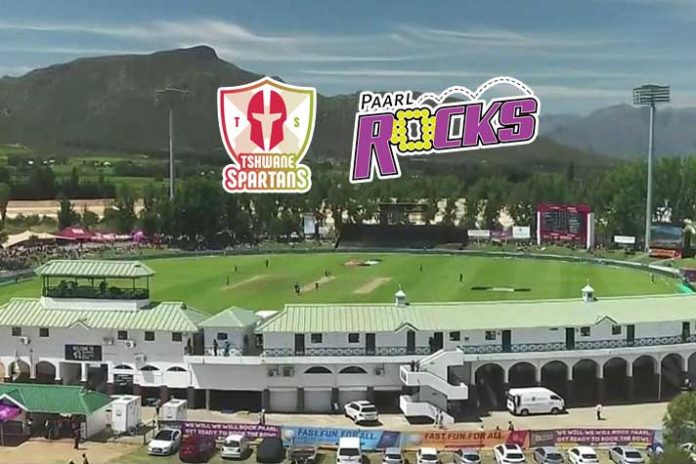 The Mzansi Super League (MSL) reaches its climax today (Monday) with the Grand Finale for the 2019 Season scheduled at Boland Park. As the Paarl Rocks welcome the Tshwane Spartans for the decider, home team coach Adrian Birrell is desperate to end the visitors’ long-standing stronghold.

The Cape side have never beaten their rivals from Centurion in the competition’s brief history – losing all four of their meetings to date.

Meanwhile Tshwane Spartans just ahead of their all-important MSL 2.0 encounter, Tshwane Spartans are dealt a major blow. Pace spearhead Lungi Ngidi has been ruled out of the final with “significant Grade 1 hamstring muscle tear” during the team’s warm-up for the play-off against the Nelson Mandela Bay Giants in Port Elizabeth last Friday.

“Lungi Ngidi sustained an acute hamstring muscle injury during the warm-up prior to the MSL T20 play-off on Friday. Scans done on Saturday showed a significant Grade 1 tear of his hamstring muscle and therefore he has been ruled out of the MSL T20 final. He will commence his rehab and return to play program with the aim of getting him fit to play for the Momentum Multiply Titans in January 2020 and based on his progress, a decision will be made regarding his availability for selection for the Proteas team,” Cricket South Africa Chief Medical Officer, Dr Shuaib Manjra had confirmed in a Press release.

It makes for an intriguing final then between MSL 2.0’s best team, who won six out of their 10 matches, and an opposing team that had won just thrice – Tshwane of course had five of their matches rained out but still managed to squeeze into the business end of action.

Two of those three wins were against the team that ended top of the table, and Mark Boucher’s side then upset the odds on Friday when they won the Qualifier against one of the other form sides this season, the Nelson Mandela Bay Giants, in Port Elizabeth to earn their trip to the final.

Rocks coach Birrell is fully aware of what his side is up against, but hopes their luck is about to turn. “Obviously we haven’t come out on top against them,” he said. “The first game last year we lost very closely, so that could have gone either way.

“Most of the others they’ve outplayed us. But I think playing here in Paarl gives us an added advantage. We are quite good at the moment in our own conditions.

“You just have to take it like any other game before and try and win the game on the day. If we play a good game of cricket there’s a good chance that we win.

Also Read: IPL 2020 Auction LIVE: What the franchisees will eye for!

Both teams also do not boast any of the top individual performers in the competition. The highest ranked man in both teams is Tabraiz Shamsi, the third best wicket-taker with 14 dismissals. He trails Imran Tahir (17) and Dale Steyn (15).

It has been more about collective team efforts from the finalists and Birrell is hoping for much of the same from his squad, who are expected to welcome back key all-rounder Dwaine Pretorius from injury.

“We need to keep doing the same things, make sure the intensity is still there,” he added. “We’ve done well to get to where we are at. We’re not relaxing thinking we’re there, we know that the biggest game is still yet to come.

Spartans captain Heinrich Klaasen is looking forward to the opportunity of playing in the MSL final, calling it an “honour” as they finalised their preparations.

“It’s a huge privilege to lead such an experienced group of players on this stage,” he said. “We’re all really excited and are looking forward to it. It will be a sell-out crowd and that’s what you want to see.”

Klaasen also believes that playing the key moments well will decide the outcome of the clash in the Boland.

“That’s how finals are ultimately decided,” he concluded. “The team that stays the calmest and plays the big moments well will come out on top.”

The MSL 2.0 will begin at 17h30 and be broadcast exclusively live on SABC.

A full stadium is expected in Paarl for the final as all the tickets have been sold out two days before the final.

The match at the Boland Park, Paarl, will start at 9:00 pm (India Time). Fans in India catch all the action LIVE and Exclusive on SONY SIX & SONY SIX HD. The feed will also be streamed live on Sony Pictures OTT platform SonyLIV.