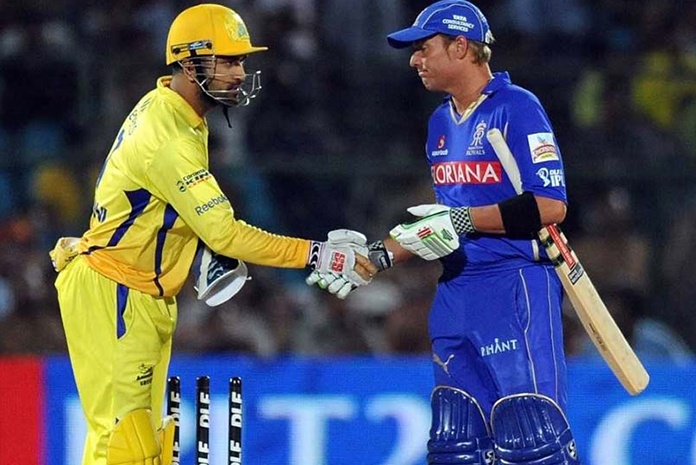 The legend of the Indian and the world cricket MS Dhoni has retired from the international cricket. But his stint as player in the Chennai Super Kings will continue not only in the 13th edition of the Indian Premier League (IPL 2020) but in all probability beyond the season.
As Dhoni has now retired, the cricketing world has already started inviting him to their party.
Former Australia cricketer Shane Warne is the first one to make Mahi a public offer to join his team in the yet to be launched The Hundred. Warne who is the head coach of London Spirit in The Hundred, made a public offer to Dhoni to join his team when the competition gets underway in England next year.
“I just wonder if I could get him down to the London Spirit next year for The Hundred. I might put out a call to see if he wants to play at Lord’s. I’ll find the money, MS!” Shane Warne told Sky Sports during his commentary duties for England’s 2nd Test against Pakistan.
The Hundred, England cricket board’s experimental competition, was set to be launched this year with 8 teams, including the London Spirit, earlier this year in June. However, the 100-balls-per-side tournament was postponed until 2021 due to the novel coronavirus pandemic.
Shane Warne on MS Dhoni : ‘Dhoni a terrific cricketer, one of the best wicketkeeper-batsman’
Warne paid a rich tribute to Dhoni, rating him as one of the best wicketkeeper-batsman to have played the sport.
“In T20 cricket, especially, the best captains, their teams will be in and around the finals all the time – it’s so key in T20 cricket – and Chennai have won [the IPL] three times.
“A terrific cricketer. You think back to some of the games that he won for India, off his own back.
“And you think of his captaincy, his leadership, he was a terrific competitor and a wonderful player. He will go down in history as one of the all-time great wicketkeeper-batsmen.
“He had a calmness about him that was fantastic and he always got the best out of his team, whether it was India, Chennai Super Kings, whoever it was. His players really respected him and responded to the way Dhoni wanted to play the game,” Warne said.
MS Dhoni announces his retirement : Check all records of Dhoni and his accomplishments
Hailing from Jharkhand, Dhoni went on to become India’s most decorated captain. His first big achievement as captain was leading India to the 2007 World T20 title in its inaugural edition. The whole Nation woke up to the phenomenon that was ‘Mahi’ as India clinched the title, beating archrivals Pakistan in the final.Four years later India clinched their second ODI World Cup title, under Dhoni’s captaincy. MSD finished off the final vs Sri Lank in style with a magnificent six at the Wankhede Stadium on April 2, 2011. His knock of 91 not out in the final will always be remembered as one of the finest ever played in a crunch World Cup final encounter.

Dhoni broke into the Indian ODI team in December 2004 on the back of his explosive batting but it was in his fifth ODI – against Pakistan at Visakhapatnam on April 5, 2005 – when ‘Dhoni the star’ was born, as he smashed the Pakistan attack to pulp, scoring a blitzkrieg 148.

There was no looking back for Dhoni after that match and he went on to become one of the most popular cricketers in India. In 2008, under Dhoni’s captaincy India won the CB series ODI tri-nation tournament in Australia, which was a big series win for the Men in Blue.

Dhoni also led India to the top of the ICC Test rankings.

He was also the ICC ODI player of the year in 2008 and 2009, becoming the first cricketer to win the award twice.
Hands down one of the most popular and loved cricketers across the country and the world, MS Dhoni leaves behind a glittering legacy.