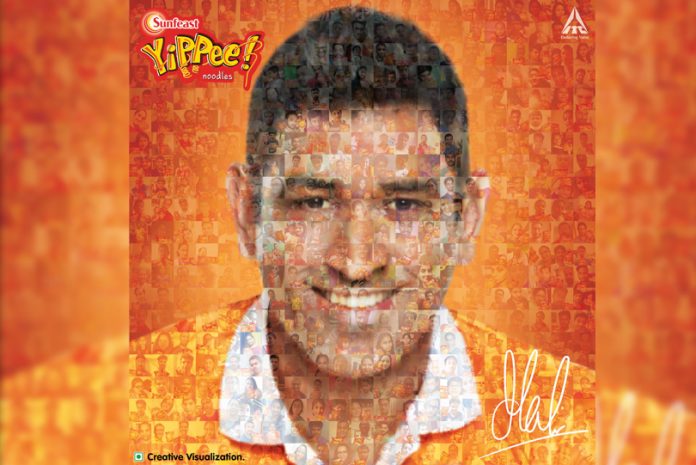 Sunfeast YiPPee!, one of the leading and most popular instant noodles brands in India, has released a unique digital collage of its brand ambassador Mahendra Singh Dhoni on his birthday. Known for its innovative round, non-sticky and long slurpy noodles, Sunfeast YiPPee! initiated a week long activity on its social media platforms. Dhoni fans were encouraged to share pictures with YiPPee! on their personal social media profiles, along with a special message for their beloved captain cool while using #MSDBirthdayWithYiPPee.

Sunfeast YiPPee! identified and uniquely leveraged digital as a platform to celebrate MS Dhoni’s birthday and enabled Dhoni fans to make it a special one for him at a time when social distancing is the norm and venturing out is not advisable. The mosaic is an appropriate illustration of Dhoni’s ever smiling and positive persona and celebrates the special relationship between the cricketer and his ardent fans.

Commenting on the initiative, the ITC Foods spokesperson said, “Similar to Sunfeast YiPPee!, Mahendra Singh Dhoni is loved by adults and children alike. The overwhelming response that our activity received within hours of its launch is a testimony to the adulation and fan following that MS Dhoni has across the country. We are encouraged by the tremendous support from the fans which enabled us to create a special birthday present for MS Dhoni. The entire YiPPee! team wishes Dhoni a prosperous and fulfilling year and a long innings ahead“.