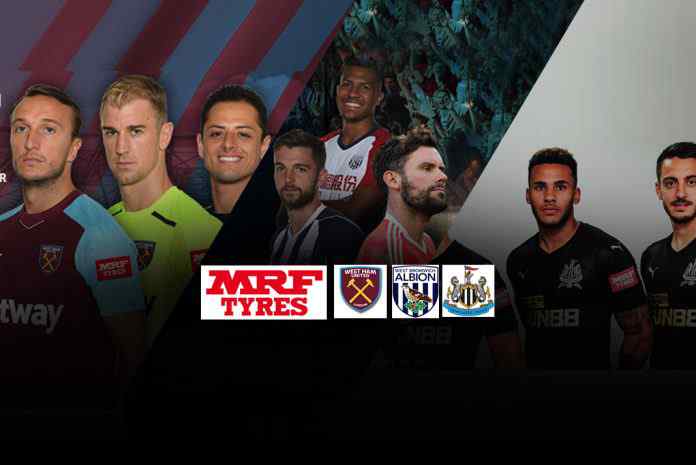 MRF logo will now appear sleeves of Newcastle and West Ham jerseys. For West Brom, MRF will be the official tyre sponsors. West Brom last month have extended their sleeve sponsorship to 12BET.

Clubs and the Indian tyre manufacturer – also known as Madras Tyre Factory – have not made the financials or contractual terms public. “With this multi-club tie-up for the 2017-18 season we are delighted to enhance our engagement with the Premier League after a modest start in 2016-17,” MRF executive vice president Koshy K Varghese said.

“MRF has been traditionally associated with cricket and motorsports and is now keen to use football as the third engine of its brand strategy to build its specialised motorsports tyres brand in Europe,” he added.

This is the first season ever since the Premier League was started in 1992 that the Football Association has allowed sleeve sponsorships. Earlier, brand endorsements were allowed only on front of the jersey.

Newcastle United managing director Lee Charnley has welcomed MRF on board. “I a,m delighted to welcome MRF as the club’s first shirt sleeve partner. MRF is a hugely respected global brand and a market leader in a territory where a passion for football is continuing to grow. The partnership is a great fit for Newcastle United and we look forward to building our relationship and assisting MRF in growth both domestically and internationally”

“We are thrilled to join Newcastle United at an important time in the club’s history. To be the club’s first shirt sleeve partner in its 125th anniversary year is a huge honour and we’re proud to be part of a one-club city. We are extremely excited for the Premier League season ahead,” said Vargherse on MRF’s association with Newcastle United.

Karren Brady, West Ham’s vice-chairman, welcomed its latest partner, “On behalf of everyone at West Ham United I’d like to welcome MRF to our family of partners. MRF join us at an important time in our history as we embark on our second season at London Stadium and look to grow as a club on and off the pitch.”

Varghese responded, “We’re delighted to join West Ham United as their first ever sleeve partner. They’re one of the most historic teams in not only English football, but world football and we’re honoured to be part of their journey. From the stadium to their loyal fanbase, we know everything about the club is going in the right direction. We look forward to the Premier League season ahead.”

West Brom’s chief commercial officer, Simon King, was delighted with its association with the tyre brand. “As we continue our eighth consecutive season in the Premier League, we believe the status of the league combined with our ever-growing fanbase gives MRF a great platform to build their brand.”

Verghese was looking forward to continuing its partnership with the Baggies in England’s top tier league for years to come. “West Brom have proved to be one of the most consistent and reliable teams in the Premier League and we are delighted to join them as their official tyre partner. The club and the Premier League provide us with an enormous platform for brand growth and we’re extremely excited to be part of the journey with the Baggies,” said Verghese.