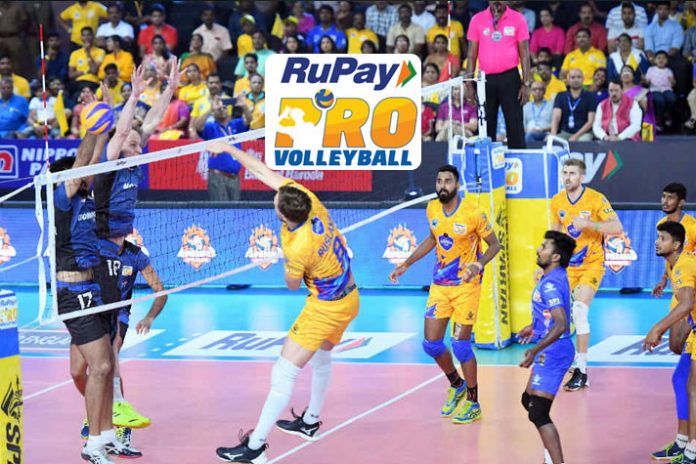 The Pro Volleyball League, which enjoyed a successful inaugural season earlier in February this year, is all set to come back bigger. The league, an initiative of Baseline Ventures and Volleyball Federation of India, saw six franchises competing in the first season which was won by the Chennai based franchise, the Chennai Spartans.

Talking about the success of season 1 which enjoyed favorable TV Ratings and saw packed houses for every game, Tuhin Mishra, MD and Co-Founder of Baseline Ventures, said, “The response to the first season was phenomenal and was a testimony to the quality of the product we had put together. After receiving a lot of positive feedback about the league in general, we are planning to make the next season bigger and better and give the Indian volleyball lover an even more memorable experience in season 2.” He added, “We have received a lot of requests from people around the world wanting to own a team in the league. We are looking into the requests and are in the process of adding one or two teams in the coming season.”

The CEO of the league, Joy Bhattacharjya, was upbeat about the league’s chances of becoming the 2nd biggest league in the country. “The amount of interest it generated among the fans in only its first season makes us really confident. We also received a vote of confidence from the Volleyball Federation of India and the FIVB. So, I have no doubts in my mind that we have created a product that will only grow bigger in coming times and can easily stake a claim to be the number 2 league in the country in a not so distant future.”

As per the post-event report by Nielsen Sports & Entertainment, TV viewership for RuPay PVL in season 1 was considerably higher than the badminton and table tennis leagues, which have already completed four and two seasons, respectively.

In terms of engagement, or time spent per viewer (TSV) also, RuPay PVL was significantly higher at 12.1 minute, compared with Premier Badminton League 2016 (8.4 minutes), Ultimate Table Tennis 2017 (4.4 minutes), Premier Badminton League 2019 (8.1 minutes) and Pro Wrestling League (11.2 minutes). This was despite the fact that the league clashed with the new TRAI tariff regime, which started from February 1 and led to a decline in reach across all channels with weekly reach dropping by close to 40%

The first season of the league was also broadcast across 33 countries. For the Indian subcontinent, the rights were with Sony Pictures Networks (SPN), while Dubai Sports aired the matches in Thailand and the Middle East and North Africa region and Singtel in Singapore.

On digital platform, RuPay PVL had reached to 1.3 million viewers, while the league also initiated the launch of the first time ever globally, a fantasy league for volleyball, which achieved a total of 178,952 active players on the day of the final.

Also, RuPay PVL was watched live in over 45 countries worldwide and garnered a total reach of 161,157 people over the course of the tournament.

In its first season, the league attracted some of the biggest names from the Volleyball world including David Lee and Paul Lotman. With the success of the first season, some more big names are expected to be roped in.

Also Read: Five Sports Leagues which ran into the dead end in 2018