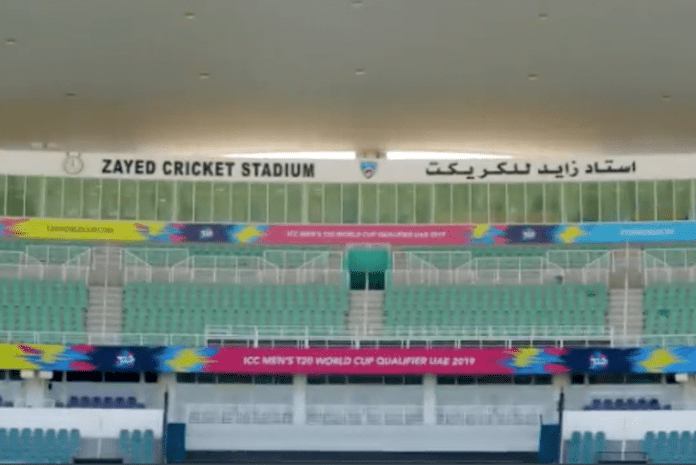 The Sheikh Zayed Stadium in Abu Dhabi is all set to host Mumbai Indians vs Chennai Super Kings for the opening match of the 13th edition of Indian Premier League today.

The ICC official on Saturday shared a video on their Twitter account to give a virtual tour of the Sheikh Zayed Stadium in Abu Dhabi and wrote: The Sheikh Zayad Stadium in Abu Dhabi, which is set to host the IPL opener today, was also one of the venues for last year’s ICC Men’s T20 World Cup Qualifier. Take a tour of the stadium and hear from the players what to expect at the venue.

The Sheikh Zayad Stadium in Abu Dhabi, which is set to host the IPL opener today, was also one of the venues for last year’s ICC Men’s T20 World Cup Qualifier.

Take a tour of the stadium and hear from the players what to expect at the venue ?️ pic.twitter.com/xCaVrPOX7B

In the video fans get a sneak- peek of the opening venue for the MI vs CSK game and get hear from the expecters about the venue.

The news from the Chennai Super Kings camp is – Dwayne Bravo, Imran Tahir and Mitchell Santner had completed six days after their arrival in UAE after taking part in the CPL and are eligible for Saturday’s game.

But both Josh Hazlewood & Sam Curran who arrived on Thursday in Dubai will be missing out in the opening game. Hazlewood and Curran’s participation is unlikely for the opener in because of Abu Dhabi’s strict quarantine protocols. If the first game would have been in Dubai, they could have played. But as the first game is in Abu Dhabi, they will be missing out of the CSK Line up.

Meanwhile, Ruturaj Gaikwad had tested negative in one COVID-19 test but another one remains. Then, there would be a cardiovascular assessment. This means even they will miss out from the playing eleven.

The only decision they are yet to make is whether to go in with Ngidi or Imran Tahir.

Unlike CSK, Mumbai Indians isn’t jittery about presence of any cricketer at this stage. They are sitting pretty, they have seen the wicket, they are based out and practicing out of Abu Dhabi only and they are the defending champions.

The only question they face is – Do they have horses for courses ? They have world class seamers like Jasprit Bumrah, Trent Boult, Nathan Coulter-Nile, Mitchell McClenaghan in the squad – but do they have quality spinners.

They had selected their team according to the conditions in India – will the same attack work in UAE ? This will be the only handicap for Mumbai Indians on UAE’s slow and dry wickets. Beside Krunal Pandya and Rahul Chahar, they will have to depend on the talented unknowns — left-arm spinner Anukul Roy and leg-spinner Prince Balwant Rai.

But all in all they will start favorites for the tie against CSK.

Mumbai Indians Likely Playing 11 for the Opening Game vs CSK