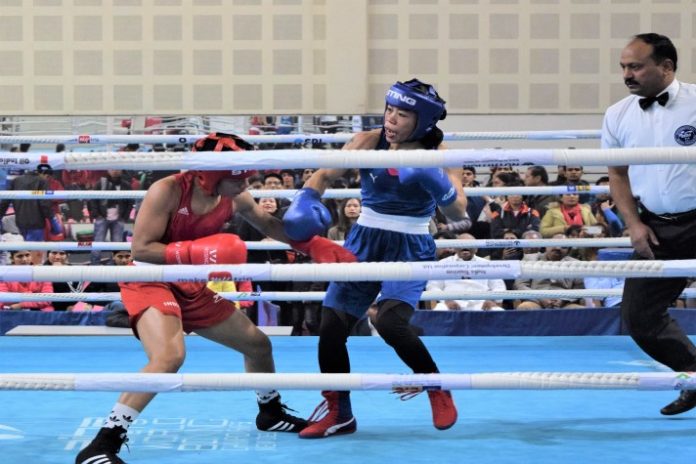 Mary Kom won her much-awaited duel with Nikhat Zareen, but she lost an opportunity to win hearts and establish her superiority in sportspersonship as the veteran of six World Championship medals refused to shake hands with the latter.

In a much-anticipated bout, six-time world champion Mary Kom defeated 23-year-old Nikhat Zareen in a trial bout to make the Indian team for next year’s Olympic qualifiers in China. Kom who defeated in a split decision of 9-1 refused to shake Nikhat’s hands after the fight. The Manipur boxer will now fight for Tokyo 2020 spot in the Asia-Oceanic qualifiers from February 3-14, 2020 in Wuhan, China.

Also Read: I didn’t start this, I didn’t create this confusion: Mary Kom lets it rip…

Nikhat was reduced to tears after an argument broke between Telangana boxing officials and the Boxing Federation of India officials. BFI President Ajay Singh had to step in to control the situation after A P Reddy, claiming to represent the Telangana Boxing Association, vociferously protested the decision. “How will boxing grow amid this kind of politics,” he later told reporters after being asked to leave the ringside by Singh.

There was a lot riding on the bout. Nikhat had after the Women’s Boxing World Championships in November demanded a trial to decide who between her and Mary Kom will go after it looked like the latter may travel to China for the Asia/Oceania Olympic qualifiers in February 2020 due to the Boxing Federation of India’s indecision over the selection policy. She had also demanded that the trials be telecast live which the BFI rejected stating that there is no precedent for it.

Mary Kom on not shaking hands with Nikhat Zareen after the bout: Why should I shake hands with her? If she want others to respect her then she should first respect others. I don’t like people with such nature.Just prove your point inside the ring,not outside. https://t.co/TERXuRECMh pic.twitter.com/vwqSvSmgN3

While Mary always stated that she would abide by whatever selection policy the BFI has, she had indicated an aversion to a trial, taking the example of other sports in which athletes don’t have to give trials. “Even in other games like badminton, who gives trial? Have you seen Saina Nehwal and P.V. Sindhu appearing for trials? But in our case it is different,” she had said in August.

After the trial bout in Delhi today (Saturday), Mary Kom was visibly pumped up at the end of the bout in which she impressed with her composure.

The 23-year-old Asian bronze-winner from Hyderabad rebuffed the youngster’s attempted hug owing to a bitter build-up to the bout. “I am happy with how I performed. I gave my all. I did not like her behaviour after the bout. I expected that as a senior boxer she would appreciate my effort. I felt hurt but I don’t want to comment anything more,” Zareen told reporters after the 51kg category bout here, adds PTI.

“She also used a bad word for me (after the bout) but it’s ok,” she added.

Mary Kom, while responding to questions on her conduct, said, “I am also a human being, I also get irritated. Can’t I get angry when my credentials are questioned like this? And this wasn’t the first time. It has happened so many times with me despite the fact that no other Indian boxer has achieved what I have achieved.”

The questions she was referring to were raised when the Boxing Federation of India, in a departure from its laid down policy considered giving Mary Kom direct selection for Olympic Qualifiers.

Zareen’s protest led to insinuations that Mary Kom was avoiding a clash with her, something that left the iconic boxer furious.

Zareen said she would come back stronger from this setback. “I will get another chance and I will prove myself there. If she doesn’t qualify from February Olympic Qualifiers, I would again appear for a trial for the world qualifiers in May,” she said.

“I want to remain positive and I am sure I will be back stronger,” she added.

IND vs PAK in T20 World Cup: Check out the players who will be featuring for the first time in the high-tension clash between...