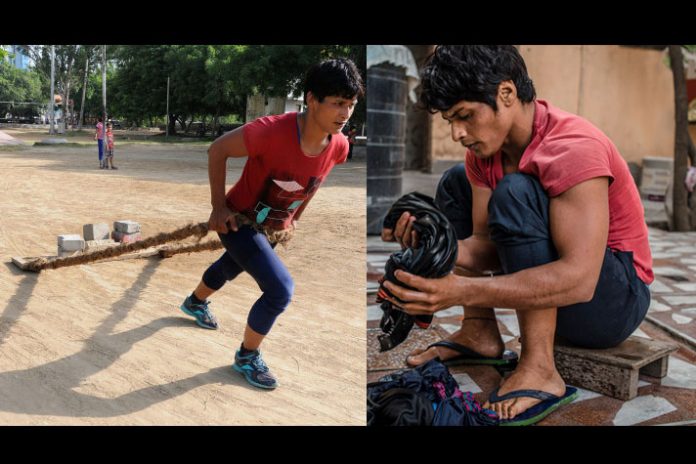 This is the tale of an Indian National Champion. A ready script to excite a movie director. A content complete for a thriller.

Neetu Sarkar has emerged a champion at the just-concluded Tata Motors National U-23 Championships in Chittorgarh. She will represent India at the Under-23 World Championships in Bucharest next month.

More than her achievements, Neetu’s journey to the pinnacle will inspire the dreamers who fall prey to their hardships. This Haryana girl is the role model for all who give up to the challenges of life. Think of a girl who is married just when she had stepped into her teens to a cerebrally unsound man, who is 30 years elder to her. She survives a rape attempt by her father-in-law and dares to walk out of that wedlock.

Only to be married to another unemployed man, within no time. She is a mother of twins a year later. A village woman at the age of just 14 with no worthwhile education, no exposure to the world outside, twin sons and 80 kilograms of weight Neetu dreams of pursuing a career in wrestling. She had a dream to live and the fortune of having the support of her husband.

For a girl born in Bhiwani district in Haryana, with one of the poorest sex ratio in the country, struggle for survival would star from her mother’s womb. Neetu was fortunate to arrive in this world live. Beyond that, the life had been a journey full of nightmares for her till the time she found support in husband Sanjay. An unemployed man, who lived on his mother’s pension, showed the resolve to support his wife even if he had to sacrifice whatever she would earn as a farm labourer in the village.

The battle to the stardom had started with the task of losing those extra kilos and be fit enough to step into an akhara – the mud wrestling arena. Neetu would get up at 3 in the morning to go for a 10km run and return home before dawn before the villagers woke up.  In three years’ time, Neetu was among the leading junior women wrestlers in India and set to topple the seasoned ones at the senior level.

The success had given her a belief to do better and a hope to make wrestling a way to support the needs of her family and two sons, who have been partners in her sacrifices. As Neetu had to leave for Rohtak for better training, the mother and the toddlers would live without each other for days. That separation would emotionally drain this mentally strong athlete, but the resolve to excel in the sport that fascinated her as a child grew stronger. There was also no other way for her to escape poverty and ensure better lives for her family.

The factors to dissuade her were plenty, including her mother-in-law’s pressure on husband Sanjay to forbid her. Amidst adversaries, Neetu got the right support from her role model Sushil Kumar, whose Sushil4Sports Foundation financed her training and stay at Rohtak.

Wrestling has also earned her ahead constable’s job with para-military force Sashastra Seema Bal (SSB). The job is another support system in her resolve to bigger glory – the immediate goal is a podium finish at the Bucharest World meet.