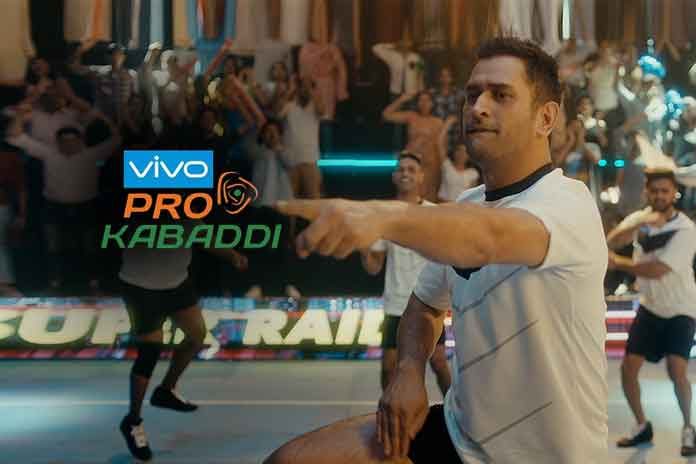 Star Sports in yet another push to get desired broadcast ratings has launched a new campaign with former India captain Mahendra Singh Dhoni.

A week after dedicating the precious Hindi movie screen Star Gold to kabaddi, Star Sports roped in Dhoni to enhance the ratings, befitting the desired status of India’s second most watched sport.

The season 6 of VIVO Pro Kabaddi is in the midst of some nail-biting action as every match is going down to the wire. As a call out to the fans to not miss any action, Star Sports, India’s leading sports broadcaster launches a new TVC featuring the former World Cup-winning captain, Mahendra Singh Dhoni, who  can be seen in a never seen before avatar as a kabaddi player in the new TVC for Vivo PKL Season VI.

Dhoni indeed is down to the court to ‘take panga’ for lifting the Pro Kabaddi broadcast scores.

The TVC opens with a usually calm and composed Dhoni going for an intensely pressure do-or-die raid, amidst cheers from the fans. He showcases some key kabaddi moves, including the famous dubki, followed by a leap to compete a super raid. The action on the mat then cuts to the living room, where Dhoni is seen watching VIVO Pro Kabaddi League, to reveal that the action on TV is as real and intense and one simply cannot afford to miss a single second; as mentioned by MS Dhoni in the TVC- ‘Yeh nahi dekha toh kya dekha!

Be a part of the #VivoProKabaddi excitement, every day at 7:30 PM on Star Sports. pic.twitter.com/IUfl5aU2ks