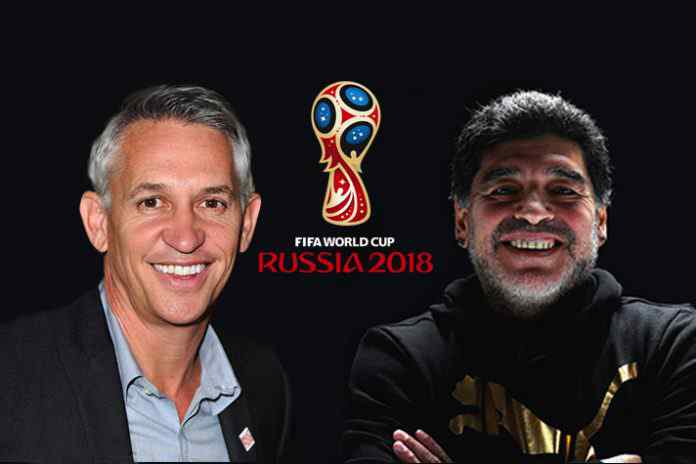 Diego Maradona and Gary Lineker will reunite at the FIFA World Cup Finals draw ceremony in Moscow next week.
Maradona has been nominated to represent Argentina at the ceremony that will see the yesteryear legends from all the eight World Cup-winning nations. The legends will assist Lineker in the World Cup draw.
Former England striker Lineker has been engaged to conduct the final draw for the FIFA World Cup Finals on December 1 along with Russian sports journalist Maria Komandnaya.

Maradona, the 1986 World Cup champion captain, will be reunited on stage with rival Lineker at the draw in Moscow. Maradona will be representing Argentina in the State Kremlin Palace. The ceremony will have representatives from the all eight World Cup-winning nations to assist in the draw, according to FIFA.

Maradona’s Argentina had eliminated Lineker’s England in the 19986 quarter-finals in Mexico City. The game is better recalled for that famous “Hand of God” goal by the Argentine captain.

Minutes later, Maradona scored one of the best goals in World Cup history, before Lineker pulled England close in a 2-1 loss. Maradona was voted player of the tournament and Lineker was the top scorer with six goals.

Lineker will host the 32-nation draw ceremony on December 1.

Gordon Banks, the English goalkeeper in the 1966 team, will represent England. Legends like Laurent Blanc, Cafu, Fabio Cannavaro, Diego Forlan, Carles Puyol, and Nikita Simonyan from hosts Russia will have the honour of representing their respective nations at the draw.