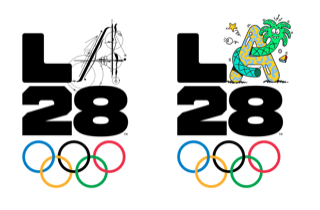 Los Angeles 2028 has unveiled a new logo for the Olympic and Paralympic Games featuring an “ever-changing A”, which organisers say will allow co-creation with members of the public able to design their own version.

The “A” is claimed to highlight the “infinite stories” of the host city and the Olympic and Paralympic Games.

Los Angeles 2028 say the logo is designed for the digital age, with the changing A enabling it to remain relevant during the eight-year build-up to the Games.

“It reflects the spirit of Los Angeles as ever-evolving and looking towards future.

“The L 2 and 8 creates a strong foundation and anchor the dynamic and ever-changing A.

“The emblem will inspire individuality and self-expression, as well as being an invitation to co-create with us.

“It will build upon a legacy and spirit of what came before us, while engaging a new generation of Olympic and Paralympic fans.”

Los Angeles 2028 : LA 2028 collaborates with Olympians to design their own version of the ‘A’

Los Angeles 2028 collaborated with Olympians, Paralympian’s, young athletes, artists, illustrators, entertainers and community leaders prior to launch, with each designing their own version of the “A”.

Participants were chosen to reflect the diverse nature of Los Angeles, with each version aimed at telling the individuals own story about the host city.

LA28 executives said the impetus to develop a dynamic emblem treatment, nearly two years in development, came in large from the nature of the Southern California market itself.

“How do you tell just one story about Los Angeles, particularly when it’s the sum of all of its many, beautiful parts?,” said Kathy Carter, LA28 chief revenue officer. “So we made the move to embrace that diversity, and this becomes a way where we can continue to tell the story of Los Angeles, and people can use this to develop their own story.”

Because of the dynamic nature of the emblem, LA 28 will not be locked into a single image during the lengthy, eight-year runup to the Games, and remain flexible to incorporate emerging cultural trends.

The organizing committee is also developing a series of measures by which fans can submit their own emblem proposals, as well as customize LA28 merchandise.

“It’s less of a Games mark and more of a cultural mark, frankly. And it’s a means to continue our storytelling,” Carter said.

The new emblem treatment succeeds a soaring angel logo the organizing committee initially used in its efforts to secure the 2024 Summer Olympics before ultimately landing the 2028 games in the IOC’s historic double-awarding three years ago with 2024 host Paris.

“There’s not one way to represent Los Angeles, and there is strength in our diverse cultures,” said Casey Wasserman, LA28 chairperson. “We have to represent the creativity and imagination of Los Angeles, the diversity of our community and the big dreams the Olympic and Paralympic Games provide.”

“We struggled for a while with this tension between traditional emblems in all of sports, which are static, and LA, which is a dynamic, changing city. When you ask people what Los Angeles represents, you’ll get a lot of answers,” he said.

The International Olympic Committee approves of the unique design process.