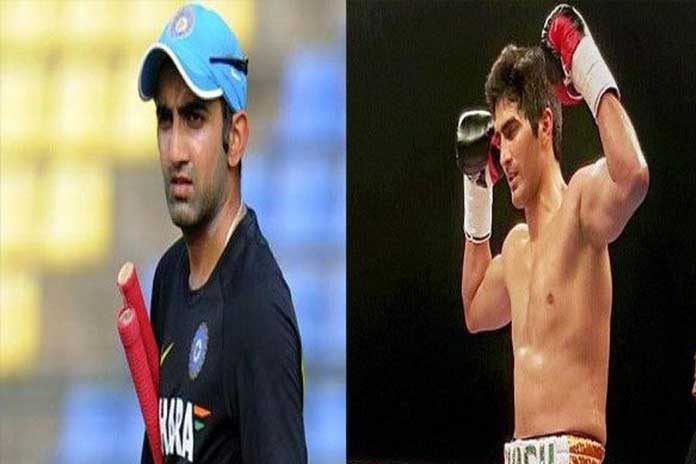 Connected by sports, boxer Vijender Singh and cricketer Gautam Gambhir have been separated by their political lineage. The two sporting heroes will be contesting the 2019 Lok Sabha elections from Delhi – from different parties in different constituencies.

The Beijing Olympic medallist Vijender will be in fray on a Congress ticket from the South Delhi constituency. Gambhir is nominated by the Bharatiya Janata Party from the East Delhi constituency. The former India opener for long has been politically active on social media. He has been vocal on the issues of national interest and national security, besides running charities and supporting the families of martyred Jawans.

Vijender has made a surprise entry to the politics as he was still focused on his career as a professional boxer. He seldom appeared politically active at any forum.

Vijender has said he will draw inspiration from boxing legend Manny Pacquiao, who is a senator in the Philippines and runs numerous charities there.

“I want to be India’s Manny Pacquaio. It would be great if I can be as good as him because I am not giving up boxing. That’s my first love, will always be. That’s my identity and I am not going to give it up,” the 33-year-old said.

Pacquiao, while serving as a Senator in the Philippines, remains an active boxer. He has defended his WBA welterweight title in January this year against American Adrien Broner. He is the only eight-division world champion in the history of boxing. He is also the first to win major world titles in four out of eight weight classes – flyweight, featherweight, lightweight and welterweight.

Vijender, according to an NDTV report, has said his path is not going to be too different if he goes on to win on debut.

“Even if I make it to Parliament, I will identify myself as boxer Vijender Singh and will continue to juggle my responsibilities,” he added.

Vijender said the issues he will focus on are youth and, of course, sports.

About joining Congress, Vijender said he “relates to the ideology and the leadership.”

The boxer with 3.79 million followers on twitter will be relying on social media for his electoral campaign.