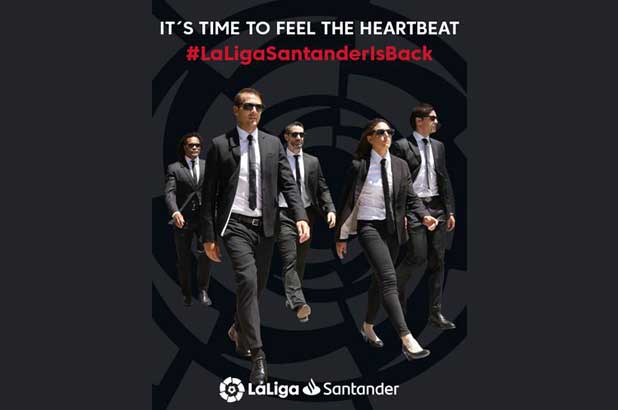 With just two days left for the brand new season kick-off, LaLiga has launched an innovative global campaign ahead of the curtain-raiser tie between Girona and Valladolid.

A video teaser, that forms a part of the campaign has been released starring LaLiga Ambassadors, Vero Boquete, Fernando Sanz, Christian Karembeu, Fernando Morientes and Gaizka Mendieta and a “heartbeat” to share around the world. These ambassadors take on the important job of distributing LaLiga’s heartbeat to international influencers and celebrities in their hometowns.

In more than 20 countries, influencers and celebrities will share reactions and messages after receiving boxes containing the heartbeat of the greatest football spectacle in the world. In addition, many of these popular personalities will travel to Spain to experience, in-person, the emotional premiere of the LaLiga Santander season. “We aim to be a leading brand not only in the world of sports but also in the world of global entertainment,” says Enrique Moreno, Global Brand Director at LaLiga.

With this campaign, LaLiga will impact more than 4 million people globally via its social networks, which are followed by 60 million users in more than 10 languages, in addition to impacting the networks of LaLiga Santander’s clubs.

During the first LaLiga Santander matchday, viewers will live a unique experience through this innovative campaign, in which LaLiga commits to “feel the heartbeat” with all of its fans throughout the entirety of the football season.