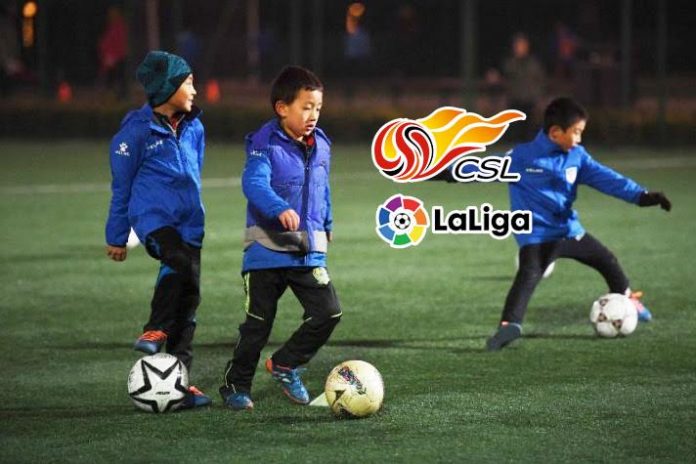 LaLiga and the Chinese Super League have signed a strategic collaboration agreement while clubs like Atletico de Madrid and Real Betis continue to increase their efforts to help promote Chinese football and expand their presence across the Asian country.

Already working in tandem in areas such as coaching players, marketing, organising events and tournaments and the implementation of new technologies, LaLiga and the Chinese Super League (CSL) have further strengthened their relationship by signing a strategic agreement last Friday. The deal covers fields such as the growth of youth football in China to the creation of financial control mechanisms for Chinese clubs, following the model that LaLiga has been using since the 2013-14 season.

Representatives from both competitions and the Chinese Football Association (CFA) were thrilled about the chance to further boost relations between the countries through football and described the signing of the agreement at an event held at LaLiga’s headquarters in Madrid as a “milestone.”

“China is a very important country and market for us. They are taking key steps forward to help football develop at all levels and it’s a great opportunity for LaLiga to contribute to that project through our experience and knowledge,” stated LaLiga president Javier Tebas.

Dong Zheng, general manager of the CSL, explained how “the close relationship with LaLiga will benefit Chinese football from the youth level up to the professional game,” and spoke positively about the new agreement claiming that it will help to create “a stable framework for collaborations between two organisations which will allow us to successfully carry out projects together.”

The document signed in Madrid explains that LaLiga will roll out training programmes for academy players and coaches in China and take part in the organising and promotion of academy competitions and friendly matches involving professional teams in both countries.

Off the pitch, the two organisations will combine efforts to make the structure of Chinese teams more professional through mechanisms such as financial controls and the implementation of new technologies.

Other fields covered in the agreement include women’s football, social responsibility actions and joint promotions and marketing initiatives.

It’s not only LaLiga but also its clubs, such as Atletico de Madrid and Real Betis, which are putting their experience and know-how at the service of Chinese clubs and institutions.

The club from the Spanish capital welcomed a joint delegation featuring representatives from the CSL and LaLiga to the Wanda Metropolitano, where the parties shared ideas about the development of Chinese football.

During the course of the visit, representatives from the Chinese league took part in meetings with several members of the club’s hierarchy and also met up with the heads of the club’s communications, marketing and youth football departments, with the academy set-up attracting particular interest on account of its fine reputation both within Spain and abroad.

The club’s participation in these meetings reflects the Madrid-based outfit’s commitment to assisting LaLiga in its bid to promote football in the Asian nation, a commitment which was formalized by last Friday’s strategic agreement.

Atleti’s involvement in Chinese football is nothing new, however, as representatives of 16 CSL clubs visited their Wanda Metropolitano stadium in December to see first-hand both the club’s and LaLiga’s working methods in areas as diverse as broadcasting, security and competition organisation.

Meanwhile, Real Betis took part, together with LaLiga, in the 2019 Youth Development Conference organised by the Chinese Football Association (CFA) in the Chinese city of Shenzhen where they explained their models for coaching and academy development.

The club were represented at the event by their youth academy’s methodology director, Pep Alomar, who used the opportunity to explain the intricacies of one of most nationally and internationally-renowned youth systems responsible for producing the likes of Fabian Ruiz, Junior, Francis and Loren Moron in recent years, following in the footsteps of Betis legends Joaquin and Rafael Gordillo.

Other teams such as Real Madrid, Rayo Vallecano and Getafe CF have also been working closely with LaLiga and Chinese football representatives to seize the opportunities that this new era in Spanish-Chinese football relationships is bringing to clubs and football as a whole across China.