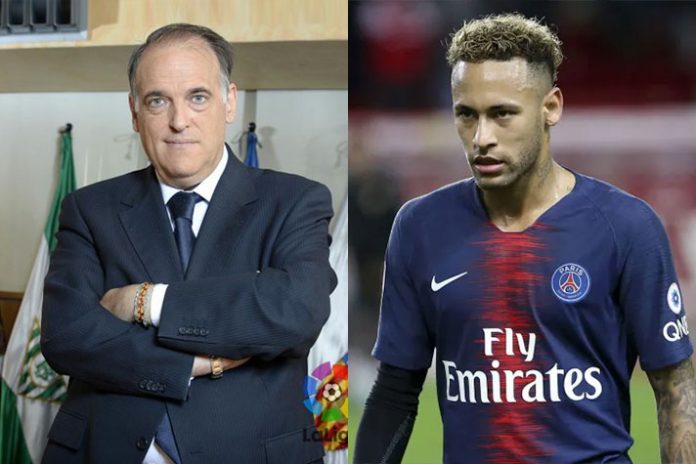 Neymar Jr is on course to be back with FC Barcelona. LaLiga president Javier Tebas did not hide his displeasure over iconic footballer’s return which potentially will enhance the top flight Spanish club football tournament’s values.

Mincing no words, Tebas has told Spanish radio station Onda Cero that he would prefer that Neymar did not return to Camp Nou. The LaLiga supremo is unhappy with star Brazilian forward’s conduct off the field.

“I prefer that Neymar does not return to Barcelona,” Tebas has been reported as telling the radio station. “We always want to bring great players, but in the case of Neymar that behaviour is not good for the competition because, in the end the news is if the player has done this or that.

“We have worked a lot in La Liga to maintain the values and we don’t want to change the image.”

Tebas felt that the 27-year-old football star did not set a good example off the pitch.

“He (Neymar) can be a great player, but the behaviour is very important in the values we transmit in the competition. If the example he sets outside the field is not correct, I prefer that he doesn’t return to La Liga because he is not a good example,” he concluded.

Neymar, who had left Barcelona for Paris Saint Germain in 2017 June for a world-record €220 million salary, is reported have agreed on a € 12 million annual pay cut to be back with Barca.

Also read: Neymar agrees on pay cut to be back with Barca

Tebas had also played down Neymar’s exit from LaLiga two years back. “La Liga and Barcelona are bigger than Neymar. “I would be more worried if Cristiano Ronaldo or Lionel Messi left,” the LaLiga president had then stated.

Desperate to move out of PSG, Neymar was also reported to have an offer Barcelona’s LaLiga rivals Real Madrid.