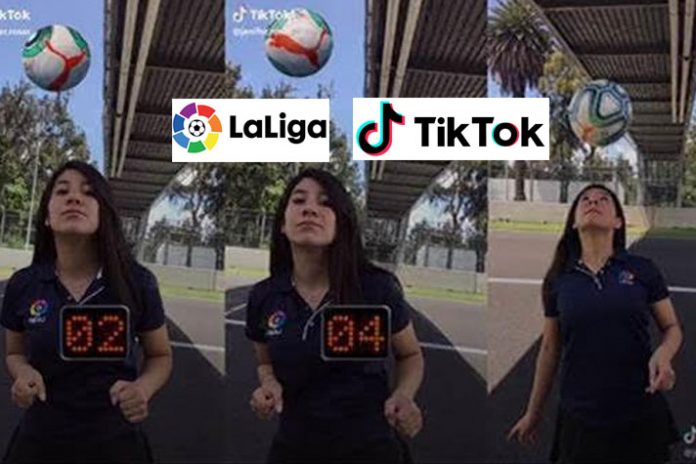 LaLiga has created a TikTok record with the most multitudinous football content challenge in the platform’s history as more than 220,000 videos and over 50 million views around the world ushered in the new LaLiga Santander season in truly global fashion.

Sports personalities and celebrities such as RCD Espanyol midfielder Matias Ezequiel Vargas and Luisa Fernanda W took part in the challenge, which was open for fans to show off their skills with a virtual match ball.

LaLiga beat the record in conjunction with TikTok, the largest short-form video platform in the world. The joint LaLiga-TikTok #HolaLaLigaSantander campaign has generated more than 220,000 videos and reached over 50 million views in just two weeks.

The #HolaLaLigaSantander challenge, which consists of fans showing off their skills by doing headed keep-ups with a virtual LaLiga ball, was a roaring success on TikTok during the first week since its launch. This is expected to continue over the coming weeks. “We’re confident that users will continue to join in this challenge so we can reach 60 million views in a few more weeks,” said Noel Nuez, TikTok’s Country Manager for Spain and South America.

LaLiga, one of the first big European leagues to open a profile on the short-form video platform, currently has 350,000 followers with many of its clubs including Atletico de Madrid, Cadiz CF, FC Barcelona, Sevilla FC, RCD Espanyol, Real Madrid CF and Real Zaragoza already on TikTok.

“We’re very happy with the activation’s results. We’ve teamed up with TikTok and managed to make history together. The results of this initiative have far surpassed our expectations and we’re convinced that this is just the beginning,” added Alfredo Bermejo, LaLiga’s Director of Digital Strategy.

Among the millions of fans from over 40 countries who took part in the #HolaLaLigaSantander initiative, it is worth making special mention of some of the sports stars, celebrities and influencers who have shaken up social media with their videos.

They include Espanyol’s Matías Ezequiel Vargas and former US football star Jimmy Conrad, as well as freestylers Javi Freestyle – the two-time Spanish champion – and Jenifer Rosas of Mexico.

Also involved were celebrities from the music and show business world, such as the Colombian Luisa Fernanda W, whose video proved the challenge’s most popular with over 1.1 million views.

Creativity has been the common theme in this challenge launched by TikTok and LaLiga, in which we have seen some wacky and entertaining videos. One such example is Dani Duke’s upload, considered to be one of the most creative of all of those posted by people joining in the fun.