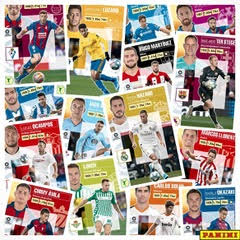 As has been the case for each of the past 49 years, PANINI and LaLiga are launching a new football season by presenting a new collection of football cards, the only official collection for the 2020/21 LaLiga Santander season. All football fans and collectors can get their hands on the albums for this very special new edition. It’s extra exciting this year because, for the first time, fans of clubs in LaLiga SmartBank – Spain’s second division – will be able to complete the collections for their teams virtually, along with those of LaLiga Santander.
Lluís Torrent, the general director and chief executive of the Panini España group, has explained why there is so much to look forward to this term: “This year, Panini’s joy at launching this new collection is greater than ever. The difficult circumstances that we’re living through have led us to double our efforts in order to stay as connected as possible to our collectors and in order for them to keep enjoying those great moments of satisfaction through our LaLiga cards.”
The collection has been available across Spain since September 2nd and, as is the case every year, it’ll be updated with different editions based on what happens in the transfer market. In the end, each fan will be able to build a collection of around 600 cards, one that is up to date, with a refreshed look and with special shiny cards. Furthermore, it’ll even be possible to win a number of free prizes, like the new PUMA football for the 2020/21 LaLiga Santander season that is attainable through the ’Supergolazo’ promotion.
Speaking about the new season’s collection, LaLiga president Javier Tebas said: “This collection of Panini cards is another example of the effort we’ve made in the football industry to try to adapt to the challenges presented to us. After 49 consecutive seasons of presenting a collection of cards and stickers, and despite the difficulties of recent times, the Panini albums will once again form an important part of LaLiga’s history.”
A record edition
There are some significant new aspects to the collection for the 2020/21 season. Given the well-documented difficulties caused by the COVID-19 crisis and the late end to last season, for example, the new campaign isn’t beginning until September and the transfer market is open until October 5th.
Last season, fans could complete the virtual collection for the 2019/20 LaLiga Santander season through the ‘MyPanini Digital Collection’ initiative. Now, this year, LaLiga SmartBank will have its own album, one that can be completed online along with that of LaLiga Santander. Furthermore, the users who complete this virtual book can claim a physical version of the album through the online Panini service.
Even when surprising changes come up, Panini remains alert and ready to swiftly update collections and to offer fans a complete and top-quality product