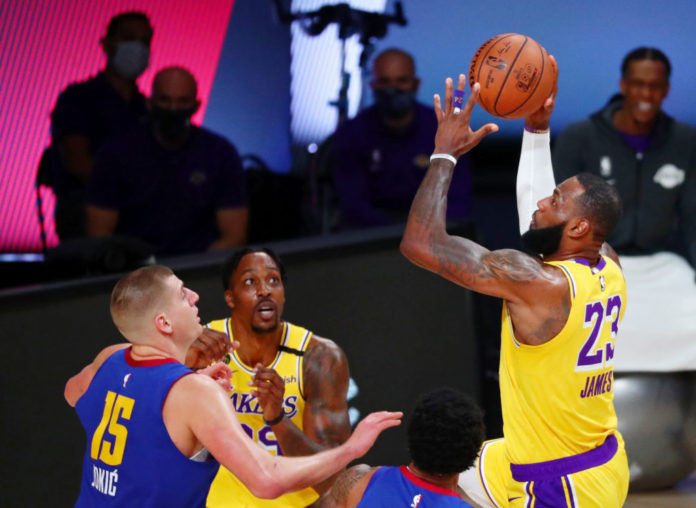 The Lakers have been in an impressive form against the Denver Nuggets as they won the first game of the series 126-114, and followed it up with a 105-103 victory in Game 2, thanks to Anthony Davis’ buzzer-beating 3.

Davis and Nikola Jokic led all scorers with 31 and 30 points, respectively, while LeBron James had 26 with 11 boards and 4 dimes.

The back-to-back wins give the top-seeded Lakers a 2-0 lead in a playoff series for the first time since 2012, when they still needed seven games to discard Denver in the first round.
Interestingly, the Lakers haven’t lost a best-of-seven in which they led 2-0 since the 1969 NBA Finals against the Boston Celtics.

On the other hand, the Denver Nuggets in the second game against Lakers proved that they’re one of the most resilient teams in recent history by coming back from a double-digit deficit and had the lead late in the fourth quarter vs. the Los Angeles Lakers, until Davis’ game-winning three-pointer made all the difference.

Interestingly, the Nuggets rallied from double-digit deficits in each of the last three games against LA’s other team to advance, but they failed to do that on Monday.

While the Nuggets made history coming back from down 3-1 to Utah and the Clippers, they haven’t been down 2-0 in a series.

“One thing I know about our group, even though we are disappointed, frustrated, angry, we’ll use that motivation to come out and try to take Game 3,” Michael Malone said after the loss.

All in all, the win in the third game is crucial for the Nuggets if they aim to turn around things, while on the other hand, Lakers will look to continue their dominance and keep things under control with a win on Wednesday.

Where Lakers vs Nuggets Game Conference Finals 3 will be streamed & broadcast in India?

Lakers vs Nuggets Conference Finals Game 3 will be broadcast on Sony Sports & Live Streamed on Sony LIV and FanCode in India.

Where will all the NBA matches will be streamed & Broadcast in India?

All NBA Playoffs and NBA Play-in games will be broadcast on Sony Sports & Live Streamed on Sony LIV and FanCode in India.