THT was stripped by his fellow Simeon Career Academy star, Derrick Rose, who’s been terrific tonight. Rose has 27 points, 6 assists and 6 boards in 38 minutes, and got possession back for NYK, who lead by 1 with 51.7 left.

The Knicks take a 1-point lead with 1:10 remaining in the match.

Kuzma got the first 2.5 minutes of OT before Matthews checked in. Both have been big tonight.

Andre Drummond’s 17th rebound was his 5th on offense, and he fed THT for a corner 3 to start the OT scoring.

AD forces a miss from Randle, and to overtime, we go.

Wesley sends us to OT!

What a play from Wesley Matthews, who snuck in for a tough put-back layup, grabbing the ball off the rim on KCP’s corner 3, and putting it up on the glass before hitting the ground.

After a pair of dominant offensive efforts at POR and vs. PHX, Davis has been off tonight, now 7 of 20 from the field after a missed J. Knicks have overloaded to him all night, to their credit.

A win and LAL are alive for the 5 or the 6 seed, though still needing help from POR or DAL.

A loss here all but locks LAL into the 7 seed and play-in game, unless Portland or Dallas go 0-3, and LAL go 3-0 to close the season.

Tie game. LAL has erased the 10-point deficit. The defense has been very strong.

Drummond’s hoop tied it, off a KCP dish.

Clutch 3 from Wesley Matthews gets LAL within 2 with 2:15 to play.

LAL’s biggest deficit of the game comes at the 8:48 mark of the 4th, as they trail 82-75. Knicks continue to stay disciplined on defense, pressuring LAL’s lone ballhandler, THT, relentlessly.

Can’t take your eyes off him, even for a second. pic.twitter.com/PG4hza8THN

Derrick Rose has been a major difference-maker. He’s +11, a game best.

Vogel up to 16-8 on challenges. Thought the one in Portland on Caruso should have gone his way, could have made him 17-7.

The previous call was overturned.

Great transition block from KCP that appeared to be a clean swipe before the ball hits the glass. Refs called a goaltend, and Vogel is challenging. Should be overturned, wiping 2 points off the board, and resulting in a jump ball.

Neither Davis nor Drummond got back in transition after a Davis miss through 2 contesting Knicks, and Rose scored a runner to reach 18 points on 8 of 12 FG’s.

Drummond is definitely benefitting from NYK focusing their defense so much on Anthony Davis … which is the idea, especially once LAL get LeBron back. That will benefit Drummond even more.

Andre Drummond has had some nice moments tonight, such as his swat of Nerlens Noel at the rim just now. He’s up to 13 points with 12 rebounds and 2 blocks in 23 minutes.

Impressive body control from Davis who managed to finish a transition play at the rim after contorting himself through contact while slowing down. He missed the and-1 FT, but Drummond tipped it in, and LAL lead 65-61.

THT starts the 2nd half for Caruso, who’d been starting for Schroder.

THT had 6 1st half assists to lead LAL.

LAL turned it over 8 times, to just 3 from the Knicks, an issue they have to deal with down 3 primary playmakers (Schroder, LeBron, Caruso).

Terrific start for Kuzma, who’s now 6 for 7 from the field with 3 triples towards 16 points in his 13 bench minutes.

The Lakers are already without Schroder and LeBron, so Caruso had been filling in at PG, and really stepped up his offensive production the last two games especially, with 18 and 17 points vs. POR and PHX.

That leaves THT and playing more through Davis or Gasol.

Caruso is not going to return due to right-foot soreness.

When Schroder is available, that pushes Caruso to the bench, and Caruso very much helps anchor that group defensively.

Nice high low action between Gasol and Harrell, as the Spaniard picked out a cutting Montrezl for a layup to start the 2nd Q.

Pregame, Frank Vogel brought up KCP as deserving of All-Defensive consideration, saying he should have mentioned him when bringing up Alex Caruso’s case the other night.

Those 2 made it tough on NYK early, but the Knicks O got going against LAL’s 2nd unit duo of THT/McLemore.

Anthony Davis has the last 6 LAL points, 4 FT’s, and a lay-in after Marc Gasol found him with a lob after Davis established himself in the NYK paint between a pair of Knicks that couldn’t deter him.

LAL has a 3-pointer apiece from Matthews and KCP, plus a Drummond and-1, enough for a 9-6 lead midway through the 1st Q.

They’ve held NYK to 3 of 9 FG’s, all 3 made jumpers from Randle on the perimeter.

Jules reaching into his bag of tricks pic.twitter.com/8EyJEjLWQl

Randle’s been great all season, and he opens tonight’s scoring with a face-up jumper. He got a switch from AD to Drummond on that trip before rising to shoot.

Of course, Davis is the most difficult matchup for Randle (or anybody) at the PF spot.

Same five to start off against the defending champs 🖐 pic.twitter.com/8Fp5FN8lur

The same as last game vs. PHX.

Playoff scenarios prior to Tuesday’s results:

LeBron is out, while Kuzma and THT are in tonight.

The Knicks have been one of the hottest teams in the league and they would’ve gained so much confidence from their gritty win over the Clippers on Sunday.

The Lakers haven’t quite been playing as well lately, but Davis is back in the lineup and was big for the Lakers in their big win over the Suns. The Lakers clearly have more to play for in this one. 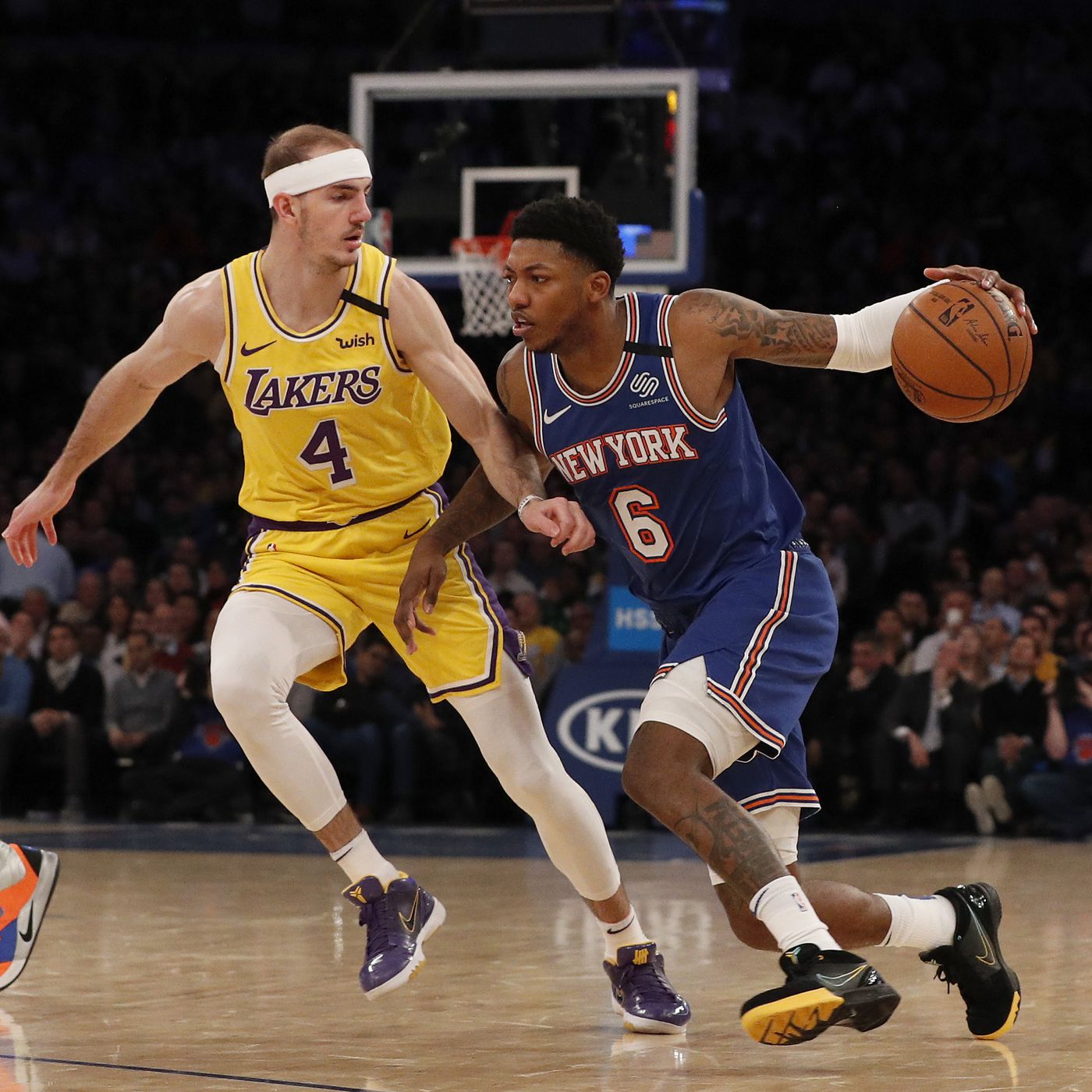