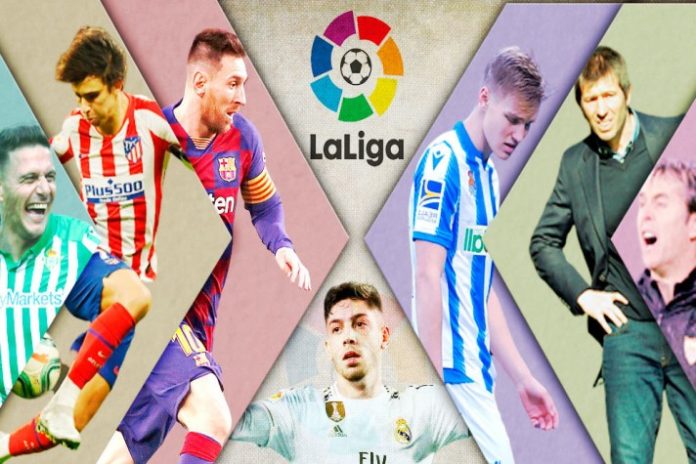 LaLiga is finally set to return after three months without football in Spain due to the global COVID-19 crisis. The season will kick-off again with the Matchday 28 clash between Sevilla FC and Real Betis, a match known as El Gran Derbi and the first of the 110 matches left to play this campaign. In India, fans can watch the live-action on Facebook starting at 1.3o hours on June 12th.
The league season will continue uninterrupted for the following six weeks until July 19th, the evolution of the pandemic in Spain and health authorities permitting. Thirty-nine days in a row with football practically every day, with matches at 23:00 and 01:30* IST (plus 16:30 pm and 20:30 IST on weekends), and with broadcast innovations: virtual stands, virtual fan audio and new camera angles.
Six weeks of passionate football with everything in LaLiga Santander still on the line. FC Barcelona and Real Madrid are vying for the title, separated by just two points, the same gap that exists between the third- and sixth-placed sides fighting for the European spots. Meanwhile, a fierce battle is ongoing in the fight against relegation, with six teams in the mix. A host of world-class matches await us, including FC Barcelona vs Atletico de Madrid, Real Madrid vs Valencia CF, Sevilla FC vs FC Barcelona and Atletico de Madrid vs Real Sociedad.
Also Read: La Liga LIVE Facebook: Atletico Madrid vs Valladolid Head to Head Statistics, La liga…
The restart has been made possible largely thanks to the tireless work of LaLiga during the lockdown, in particular the exhaustive and comprehensive protocol developed together with the Spanish health authorities which allowed LaLiga clubs to return to training safely. Over a month of Spring ‘pre-season’ meticulously adapted to a ‘new reality’ across society, and scrupulously followed by clubs and players. This painstaking effort to guarantee the safety of all professionals involved while ensuring the return of football will finally see the fruits of its labour with the restart of the league season on June 11th.

Where is Espanyol vs Levante being played? RCDE Stadium

Where can I get tickets for Espanyol vs Levante? No tickets are available as these matches are being played behind closed doors

Where can I stream Espanyol vs Levante in India? The La Liga games as usual will be streamed live on Facebook in the Indian Sub-Continent.