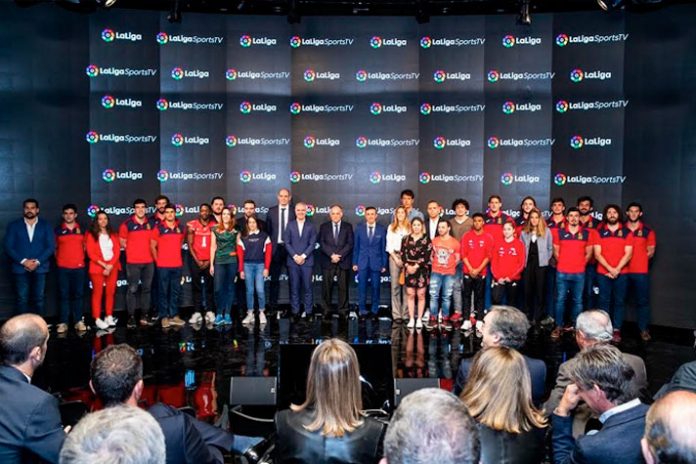 La Liga, the organising body for Spanish club football’s top two tiers, has become the first major European league to launch its own over-the-top (OTT) streaming service. The first of its kind platform will not be limiting its services to just football streaming.

Reports quoting La Liga officials suggest that other than football other sports on the platform include badminton, basketball, boxing, gymnastics, handball, hockey, motor racing, snooker, super-bike, table tennis, triathlon, eSports, water polo and much more. The announcement event was graced by Olympic Gold medallist Carolina Marin who along with the LaLiga officials announced the launch of the platform.

LaLiga Sports TV is available via mobiles, tablets, Samsung Smart TV and screen mirroring. It will not show live La Liga games as the meida, but will include other content from Spanish football’s top flight such as match highlights and pre and post-match interviews. Commenting on the launch, La Liga president Javier Tebas said: “The aim is to offer less high-profile sports greater and improved visibility via a platform where content is quickly and easily accessible, allowing fans to enjoy their favourite sport wherever, whenever and however they want.”

The launch of LaLigaSportsTV has been anticipated for some time and forms part of the league’s LaLigaSports project, which was created to offer sporting federations in Spain enhanced exposure and help with their development.

La Liga said a key aim of the niche sports platform is to assist federations in gaining a better understanding of evolving user consumption habits, so that they can develop their commercialisation strategies.

Jose Hidalgo, president of the Spanish Sports Association, added: “LaLigaSportsTV is a platform that will bring about a digital transformation and will offer exposure to the work carried out by each of the Spanish sporting federations.” La Liga is the first major European soccer league to launch its own OTT service, although no league has yet committed to showing live matches on a streaming platform. UEFA, European soccer’s governing body, revealed in February that it will launch its own OTT platform within six months, with the service initially dedicated to showing women’s and youth soccer matches.