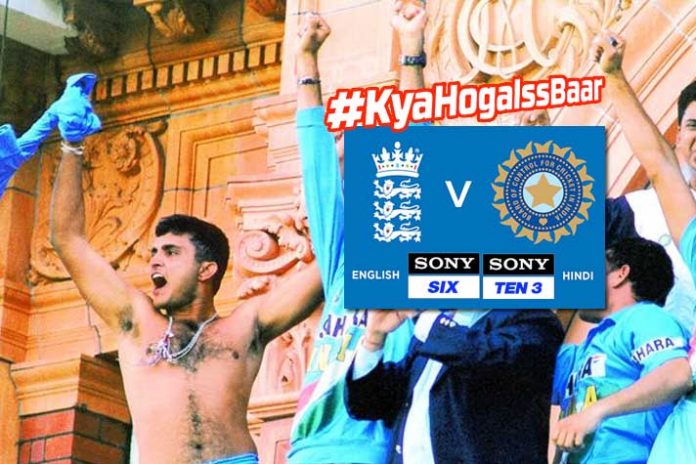 With over 200 days of international cricket under its belt, Sony Pictures Networks has announced its all-star panel line-up and programming initiatives for the 80-day tour beginning from 3rd July.

The official and exclusive broadcaster of the India-England series, Sony has also released its campaign Kya Hoga Iss Baar.

The series, spanning over two months, comprises three T20s, three ODIs and five Test matches which will be played across nine venues in the U.K.

SPN’s celebrated live wraparound show, Extraaa Innings comes back for the high-octane bilateral cricket series, between two of the best cricket teams in the world, with a whole new look. Apart from the rethought set design, the show will now feature personality-driven segments for a healthy dose of entertainment and increased fan engagement to bring the Indian touch to the analyses, Sony Pictures Network has stated in a Press release.

The Sports cluster of SPN also unveiled its marketing campaign, Kya Hoga Iss Baar. The 40-second campaign film has been inspired by the uncertainty that comes when India tours England. Every time India has toured England, the results have bordered on extreme. From ecstatic and memorable victories to forgettable defeats (especially in Tests), Indians have witnessed it all.

Kya Hoga Iss Baar (What would happen this time around?) was the obvious question that was asked about the upcoming tour. This message has been conveyed in a tongue-in-cheek way while building enough intrigue for viewers to tune in. The film ends with a cheeky line with reference to the incident during India’s famous NatWest trophy win when Ganguly waved his shirt from the balcony at Lord’s.

The film showcases snapshots of fans watching India play against England, while they are at a restaurant, working out at the gym and working in the kitchen or office. It captures the heightened emotions of fans on the unpredictable trajectory of outcomes whenever India faces England at their home advantage and ends on an optimistic note that while the game may be unpredictable, the outcome is sure to be in India’s favour.

Rajesh Kaul, President, Distribution and Sports Business, Sony Pictures Network India said, “The Sports channels of SPN is the one-stop destination for all the cricket lovers with more than 200 days of cricket planned over the next 9 months. Our aim is to ensure an enhanced viewing experience for our audience with an expert panel of Indian legends who have played the game of cricket and a new unique look for our flagship live studio show, Extraaa Innings.”

Sourav Ganguly, Panellist & Commentator, India Tour of England 2018, said “The conditions in England have proven to be tough for many Indian teams in the past. However, with the fantastic form of the team this year, I think we are in for a closely contested series. I have a lot of fond memories of playing in England and I can’t wait to share my thoughts and engage with cricket fans throughout the tour as a commentator for SPN.”