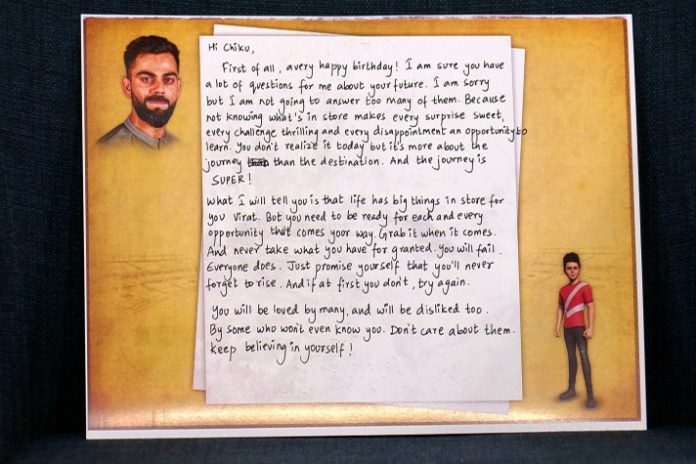 In a well-thought marketing strategy, Star Sports has circulated a letter from the most impactful cricket and sport’s biggest icon ever to his 15-year-old self.

Virat Kohli at 15 was a raw talent, courageous, loaded with talent and glimpses of an assured distinct achiever at the top of the cricketing world. That was the Sachin Tendulkar era for cricket record books and sports’ brand market. Mahendra Singh Dhoni was an unheard name.

Cricket’s record and commercials primarily were starting and ending with one and only Sachin Ramesh Tendulkar. In a quaint corner of West Delhi a dream was rising, himself unaware of the peaks he was destined to scale.

Sixteen years later as the cricket and brand market King, Kohli is turning the clock back for a conversation with his 15-year-old self. Commercial activity for Star Sports though, the letter can simply be the key to success in all walks of life.

Kohli, on the occasion of his 31st birthday today (Tuesday), has penned the letter to his 15-year old self – Cheeku (His nickname). The letter, which captures Virat’s reflections on his teenage years, is also a message for his animated avatar, which is being born across millions of TV and digital screens today.

‘Super V’ is an animated series about a 15-year old aspiring Cricketer inspired by Indian Captain Virat Kohli‘s teenage years. The 15-year old Virat discovers he has superpowers and assumes the responsibility of fighting the looming threat of a super-villain, which can destroy the world. While he vanquishes villains, he also has to deal with the everyday issues that an ordinary teenager faces.

The 12-part series premieres on the occasion of Virat Kohli’s birthday in 70+ countries across 5 continents via the Star network and Hotstar.

Virat, in his letter, advises his 15-year old self to chase his dreams while cherishing his reality. He wants himself to grab every opportunity that comes his way without letting go of a single moment that he can get with his family. 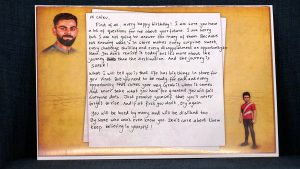 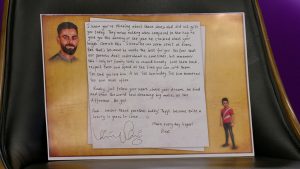 Looking back, Kohli writes the stuff he himself won’t have been aware of about the future held for him. “What I will tell you that life has big things in store for you Virat. But you need to be ready for each and every opportunity that comes your way. Grab it when it comes. And, never take what you have for granted. You will fail. Everyone does. Just tell yourself that you will never forget to rise. And, if at first, you don’t, try again,” the words are a lesson for the lifetime to each individual, no matter how successful one is.

“You will be loved by many and will be disliked too. By some who won’t even know you. Don’t care about them. Keep believing in yourself!”

There is another piece of advice for every aspirant. “Just follow your heart. Chase your dreams. Be kind and show the world how dreaming bid makes all the difference,” writes the matured, sorted, successful Kohli.

Virat’s journey in Super V is also inspired by real-life incidents from Cricketer’s life so it’s appropriate that Virat himself makes an appearance in every episode to underline what he thinks the life-lesson in that episode is. His appearance as a ‘sutradhaar’ in Super V is aimed at connecting Virat with young viewers across the country and hopefully helping them in a small way in their own personal journeys. The series aims to emphasize the balance between power and responsibility, freedom and accountability, self-confidence and humility and most importantly, loving yourself and loving others.

Commissioned in 2017, Super V has been produced as a collaboration between Star India, Cornerstone Animation and Baweja Movies. The series premieres today at 3:30 PM IST and airs every Sunday thereafter at 9 AM and 4 PM on Star Plus, Star Sports, Disney Channel and Marvel HQ. The show streams on Hotstar.

BCCI president has not spoken to me on Dhoni yet, will meet him when…