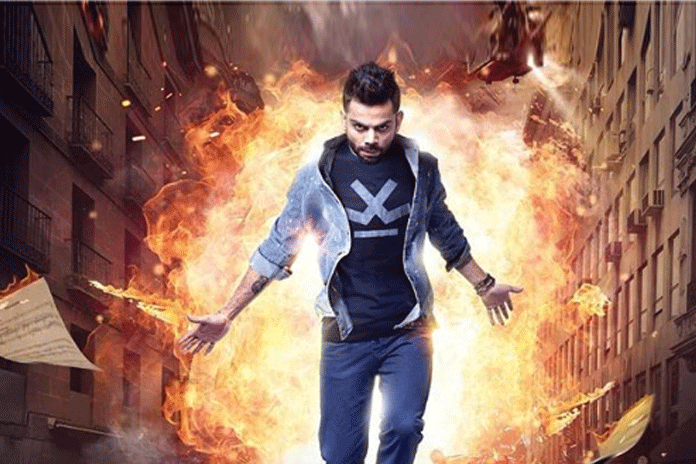 Virat Kohli may be out from cricket action for a while, but he can’t be out of news and minds of his fans.

The team India captain, on a rest as his teammates are dominating the ongoing Asia Cup cricket tournament, is busy fulfilling is personal and professional commitments.

India’s biggest and most prominent face to promote a brand, Kohli has also taken to his social media handles to share a teaser Video – TRAILER. All the fans can make out that the film has a strong Virat Kohli connect. Rest is anybody’s guess.

The Trailer was also promoted heavily in print media on last Friday, with a teaser for September 28 as the release date.

When Virat Kohli is away from the cricket and media glare, he is often seen promoting his own business ventures.

This time, the iconic cricketer and world’s top batsman is seen in a rather unusual avatar, with a possible indication of his foray into a something new and exciting.

The social media is abuzz with speculations after Kohli’s series of Instagram posts that showed a sneak peek into apparently a new movie based on the fitness and style demigod.

Indian Cricket team captain Virat Kohli has just revealed the teaser of his upcoming movie, titled ‘Trailer: The Movie’, which he announced earlier this month.

Kohli has posted a video on his Instagram handle with the caption:  “Time to tease you guys with a small teaser. trailerthemovie.com#TrailerTheMovie.”

Time to tease you guys with a small teaser. ? trailerthemovie.com #TrailerTheMovie

The small teaser has kept all guessing.

The 29-year-old, who has been rested from the ongoing Asia Cup 2018 due to his hectic schedule, also shared a photo of the poster of the movie titled ‘Trailer The Movie’ a couple of days ago.

The poster shared in the post captioned: “Another debut after 10 years, can’t wait!  #TrailerTheMovie www.trailerthemovie.com,” had a mention of his athleisure wear clothing brand WROGN with  28/09/2018 as the release date.

Even when it is still not confirmed if it will be full-fledged movie or just a short film for brand promotion, the fans are already eager to watch his movie after a look at action-packed teaser.

It will be interesting to see the hard-hitting batsman following the footsteps of his better half and Bollywood heartthrob Anushka Sharma, with whom he got married last year.

Amidst all guesses, one fact can be stated with certainty. Just like his cricketing skills the Delhi boy won’t be found wanting on celluloid. Like cricket, acting comes naturally to the biggest showman of Indian sports. The biggest prankster in the Team India dressing room.