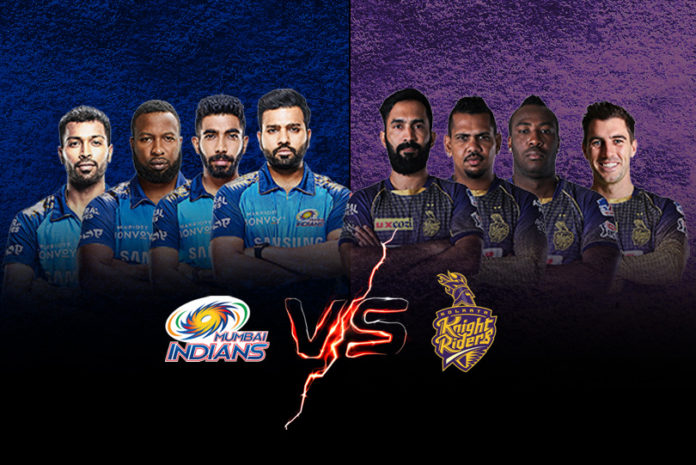 It will be battle of big guns tonite in the Indian Premier League (IPL 2020). Battle between Kolkata Knight Riders (KKR) and Mumbai Indians (MI). Since 2013, Mumbai Indians have never won an opening game and the story was no different this season too. MI will want to make a positive return, after failing to secure three points in the opening match against Chennai Super Kings.

The Rohit Sharma-led side will take on Dinesh Karthik’s Kolkata Knight Riders on Wednesday at Sheikh Zayed Stadium, Abu Dhabi. However, it will not be an easy task, given the form Andre Russell is in. The Windies all-rounder will be the marquee player for KKR. He is coming into the Indian Premier League after a successful Caribbean Premier League campaign. He will find support in captain Karthik, and Shubman Gill. Put Pat Cummins and Sunil Narine in the mix, and Mumbai Indians can have another bad outing at Sheikh Zayed stadium.

But to tackle KKR’s ‘fantastic four, the four-times champions have their own ‘fab four’ in Rohit Sharma, Jasprit Bumrah, Kieron Pollard and Hardik Pandya. While skipper Sharma and Bumrah looked a little rustic, Pollard and Pandya were in good touch.
KKR vs MI: Battle between Kolkata Knight Riders Fantastic Four and Mumbai Indians Fab Four

1) Kieron Pollard: Rs 5.4 cr
A Mumbai Indians’ veteran, Pollard has been with the side through thick and thin. He has seen MI emerge as champions and also when it struggled. He stands for everything Mumbai is about — faith, teamwork and courage. Not only he can tonk the ball hard, but he is also an exceptional fielder in the deep and nothing can go past him. While his bowling has been on a decline, the Windies giant’s experience of the format and his long association with the team makes him an integral member of the side. He is expected to lift the morale of the side and put them back on track when going gets tough.

2) Rohit Sharma: Rs 15 cr
All eyes will once again be on him as he takes charge as captain of the defending champions. Rohit Sharma has etched his name as the most successful captain in the IPL with four trophies, the most by anyone in the tournament. Undoubtedly, the most important cog in Mumbai Indians’ wheel, Rohit is high on confidence as he starts the season on the back of the Rajiv Gandhi Khel Ratna Award, the highest sporting honour in India.

A prolific run-getter, the Hitman is one of the most naturally gifted batsmen in the world and has been enjoying a tremendous run with the bat. When it comes to the shorter format, there are few who can match his striking abilities.

Rohit proved why he is regarded as a special talent when he became the first batsman to strike two double centuries in the ODIs and he now has three. He was one of the most consistent Deccan Chargers batsmen in the first three seasons of the IPL and was instrumental in his former franchise winning the 2009 crown.

However, since 2011, Rohit has been an integral part of the Mumbai Indians guiding their batting line-up. He took over the team’s captaincy a couple of games into the 2013 season and led MI to their maiden IPL title. MI do not have good memories of the UAE having lost all their games here but they have their bases covered and with Rohit at the helm, they are sure to make a big impact.

3) Jasprit Bumrah: Rs 7 cr
No other cricketer has made as much progress as this man with an unorthodox action. Breaking all myths and stereotypes, Jasprit Bumrah has emerged as India’s No. 1 bowler across all formats. His transition from white-ball cricket to red ball has been seamless and he now has five-wicket hauls in South Africa, England and Australia. From getting Virat Kohli as his debut IPL wicket, Bumrah’s stature has grown rapidly and he is a vital cog in MI’s wheel. If the IPL is all about spotting Indian talent and giving them the platform, the credit for Bumrah’s rapid rise must go to Mumbai Indians.

It was John Wright, who spotted him in the Syed Mushtaq Ali Trophy and drafted him into the squad. Bowling alongside Lasith Malinga has helped and the Sri Lankan star has backed his strength and boosted his confidence. The master of yorkers has passed on his experience and the two will be back again in the 13th edition to wreak havoc.

4) Hardik Pandya: Rs 11 cr
If there is one thing that separates Hardik Pandya from other young cricketers, it is his immense self-belief. The flamboyant Baroda all-rounder never lets pressure affect his game, but instead relishes such situations. A big hitter and a fast-bowling all-rounder, Hardik ticks all the boxes that a team desires from an all-rounder. It was no surprise that he was fast-tracked into the Indian ODI and T20 side after a successful run in the IPL 2015.

In his debut IPL game against RCB, he hit a six off just the second ball he faced. However, his potential was truly known when he took Mumbai to victory with a quick-fire eight ball 21 against CSK coming when the team needed 30 from two overs.

In the 12th edition of IPL, he scored 400 runs and picked up 14 wickets, proving his versatility. After missing out on a lot of action owing to a back injury, Hardik has trained hard and is rearing to go. Expect him to go ballistic yet again!

1) Pat Cummins: Rs 15.5 cr
The Australian fast bowler has not looked back since making his first-class debut in 2011 for New South Wales. He bagged seven wickets on his Test debut and was the No.1 wicket-taker in his maiden Big Bash League, with 11 wickets at 14.09. He was the youngest player to receive a contract with Cricket Australia.

The bowler who was earlier part of the Kolkata Knight Riders squad was bought by the Delhi Capitals ahead of IPL 2017. He was the most expensive buy in the 2020 IPL Auction after being bagged by KKR for a whopping 15.50 crores. It is back to purple and gold for pacer Cummins.

One of the mainstays of KKR’s bowling attack for years, Sunil Narine’s batting exploits have come to the fore of late more than his bowling. He suffered a down-run in his bowling when he was called for a suspect action which forced him to modify his action. But Narine redeemed himself back with his batting capabilities when he was promoted as an opener by KKR. He gave blazing starts to his side and became a threat to the opposition in the early part of the innings. The team management has time and again reposed faith in his all-round abilities and will be looking to contribute in this season as well.

Attacking all-rounder from the Caribbean, Andre Russell is one of the most sought-after talents at the Indian Premier League. He has proved his credentials time and again with masterful batting and bowling performances in the past for KKR. His famed abilities as an impactful all-rounder have come to the fore time and again when his team has required. Be it in run-chases or setting a big total on the board, Andre Russell has been the trump card for KKR.

Dinesh Karthik is one of the most experienced wicketkeeper-batsman in the scheme of things. He led KKR to playoffs in 2018 and his side finished fifth in the points table in 2019. Post the Nidahas Trophy in Sri Lanka in 2018, Karthik has upped the ante in terms of his finishing skills in the shortest version. An IPL career tally of 3654 runs at a strike rate of 129.80 plus being tidy behind the stumps is testimony to the value the KKR captain brings to the table.

KKR vs MI IPL 2020 LIVE: Where to catch KKR vs MI Live Streaming ?
The match between Kolkata Knight Riders vs Mumbai Indians will be live broadcasted on Star Sports Network in the Indian Sub-Continent. The MI vs KKR will also be Live Streamed on Disney+ Hotstar.