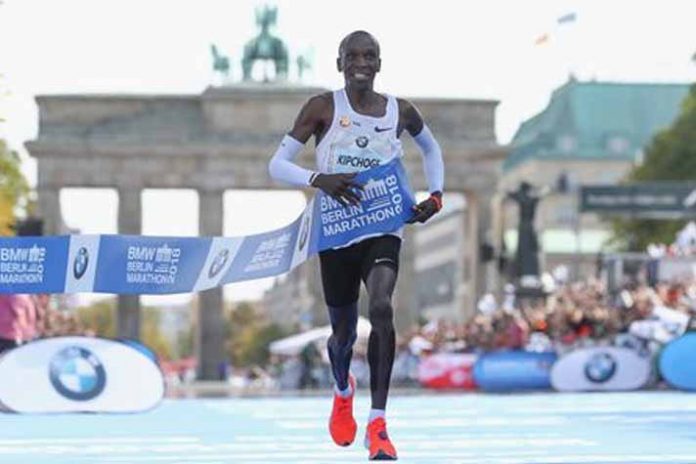 Over 500 million people have watched Eliud Kipchoge creating a marathon history on Sunday last has the Kenyan long-distance runner became the first-ever athlete to cover the 42.195-meter distance in less than two hours.

While Kipchoge set the marathon route ablaze, another record was created by the global broadcast of the event on YouTube and other mediums. Sunset+Vine, host broadcaster for the event has shared the record audience numbers for the race that saw Kipchoge romping home in 1 hour 59 minutes and 40 seconds.

“The viewing figures are coming in for @EliudKipchoge’s  @INEOS159 and they’re very impressive! 500 million including 4.9m YouTube views,” read the description for the tweet on Sunset+vine official handle @sunsetandvine. “

The viewing figures are coming in for @EliudKipchoge’s @INEOS159 and they’re very impressive! 500 million including 4.9m YouTube views https://t.co/ZnHkMMsv2J

The marathon in Central Vienna, won by Kipchoge in just 1h59m40s, was streamed live on YouTube, broadcast on BBC red button, on Eurosport and by a long list of different global broadcasters.

Globally, across the 49 broadcasters that aired the event in 200 territories, it had a total reach in excess of 500m viewers.

120k people turned up in Vienna to cheer Kipchoge along and witness the marathon themselves.

The INEOS 1:59 Challenge news has been covered 9,344 times by 1,081 TV channels in 296 markets across the world. On top of this, there have been 9,789 online press articles covering the INEOS 1:59 Challenge, reveals Sunset_Vine, the host broadcaster for the Sunday’s historic event, broadcastnow.co.uk has reported.

Jo Grindley, CMO/CCO of INEOS TEAM UK, who led the engagement side of the INEOS 1:59 Challenge said: “The initial numbers coming from this weekend’s coverage are simply astounding and there is no sign that the coverage is slowing down.”

The race can be viewed in full still on YouTube, and Sports Channel Network is currently hosting a full highlights package of the marathon.