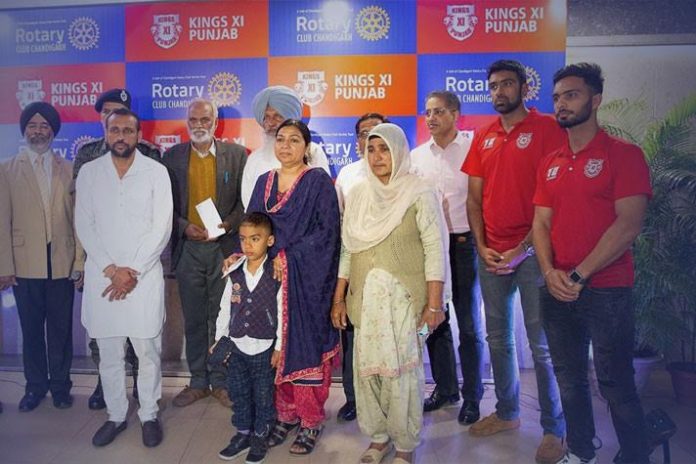 Kings XI Punjab has extended a help of ₹5 lakhs each to the five families of the CRPF jawans from Punjab and Himachal Pradesh, who attained martyrdom during the Pulwama attack last month.

With the assistance of The Rotary Club of Chandigarh, Kings XI Punjab gave cheques of ₹5 lakhs to each of the families of the five CRPF jawans hailing from Punjab and Himachal Pradesh.

In a press meet held at Chandigarh on Tuesday, the families of the four CRPF jawans from Punjab and one from Himachal were present to receive the support extended by the Mohali-based IPL franchisee. They were joined by Rotary District Governor Praveen Goyal, Rotary Club Chandigarh President AP Singh, along with KXIP head of operations Anant Sarkaria, CFO LC Gupta, captain Ravichandran Ashwin and Mandeep Singh.

“We are extremely grateful to have partnered with the Rotary Club of Chandigarh for this project who have helped us connect with the families of our brave jawans, who put their lives on the line every single day for us,” KXIP CEO Satish Menon said “We as a team would like to stand behind and honour their sacrifice.”

These five jawans being honoured were part of the 78-vehicles convoy carrying 2,547 CRPF personnel. Two buses from the convoy were ambushed in the Pulwama district in the Kashmir Valley on 14th February.

IPL 2019: It is total Punjabi tadka for Kings XI