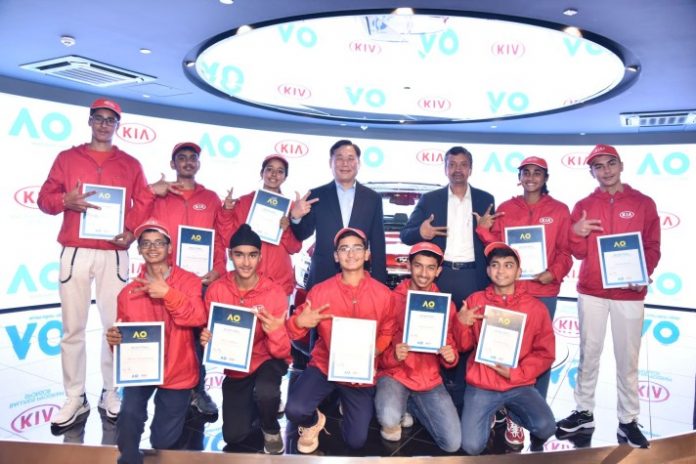 Ten lucky kids, including two from Delhi, have been selected to represent India as ball-boys for the Australian Open tennis tournament starting next month. KIA Motors unveiled the excited kids at a Press conference in New Delhi on Wednesday.

In the second year of the initiative in association with the year’s first Grand Slam, an elaborate selection process was carried out across the country. This was followed up by a rigorous training schedule to prepare the kids to carry out their duties as all-boys in front of a world-wide audience.

The list, of boys and girls aged between 12 and 15, includes Divyanshu Pandey and Harshit Pandita from Delhi, Aditya BMV and Sanskruti Vadakattu from Hyderabad, Atharva Hitendra from Ahmedabad, Atrijo Sengupta from Kolkata, Rijul Bhatia, Sargam Singla and Yashvardhan Gaur from Punjab and Sharvin Kaustubh from Mumbai.

Also Read: Bold Australian Open look to be seen in the first slam of 2020

After a successful first edition of the Ballkids Program in 2019, this year more than 250 young tennis enthusiasts from across India attended trials where they showcased their tennis expertise, agility and communication skills. The trials for the second season of the Australian Open Ballkids India Program took place in 10 cities to present this once-in-a-lifetime opportunity to tennis enthusiasts. The official squad of the Programme comes from different parts of India, which is a testament to the immense passion in youth all over the country. The final squad of 10 kids was selected by the Australian Open officials who put the kids through a series of gruelling tests like the Rolling Technique and Servicing Technique among others that tested their athleticism and their on-court communication skills.

“I wish all the best to the kids who have been selected as the official Ballkids for the Australian Open 2020. There is nothing greater than pursuing your passion and being able to live it. Kia Motors has always gone beyond its core business and connected with consumers by promoting and encouraging them to explore their passions. It’s great to see so many enthusiasts believing in their passion for the sport and we at Kia are privileged to have been able to provide them with this opportunity to live their dreams. We are overwhelmed with the response for the second edition of the Australian Open Ballkids India program and will continue to support sports and the undying spirit of sportsmanship in India through such initiatives”, said Mr. Manohar Bhat, Vice President and Head – Sales and Marketing, Kia Motors India.

Kia has been a global custodian of sports partnering various global sporting events such as the FIFA World Cup and Australian Open. Through the partnership with AO for the Australian Open Ballkids International Program, FIFA for OMBC (Official Match Ball Carrier) program and Bengaluru Football Club for Indian Super League, Kia has encouraged millions of sports enthusiasts in India and created a unique fan base.