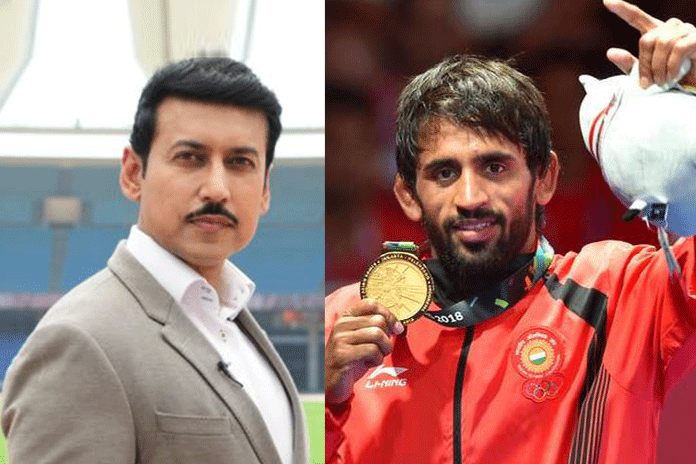 Bajrang Punia is a man on mission. Focused on his goal with the serenity of a Buddhist Monk. The 25-year-old wrestler is determined to get an Olympic gold at the 2020 Tokyo Games and is his ultimate identity.

A Tokyo 2020 gold symbolic image has been his identity on the messenger application on his personal mobile phone. That one image kept reminding him of his ultimate mission even when he celebrated his success at the 2018 Asian Games in Jakarta and Palembang.

Bajrang takes pride in his triumphs, accolades and recognitions as he stays focused on his ultimate goal. Ironically the champion wrestler finds himself destructed by an abject apathy as he resolves to fight for his right – the Rajiv Gandhi Khel Ratna, which Bajrang merits as much as, if not less than the two athletes selected for India’s highest sports award for the year.

Bajrang confesses the resolve to fight for his right is affecting his preparations for the World Championships in Budapest, Hungary, from October 20 to 28. However, he believes if he cannot fight for his right, how will he fight for the dream of his millions of fans.

Miffed over being denied the Rajiv Gandhi Khel Ratna in spite of best credentials and merit, Poonia is gearing up to seek the legal route if his voice goes unheard. Before taking the matter to the court, he has explored the one last option of taking up his case with Sports Minister Rajyavardhan Singh Rathore, an Olympic medallist himself.

The minister has given him an assurance that the matter will be looked into, adds PTI.

“I was supposed to meet the Minister today but suddenly we got a call last evening for the meeting. I asked the Minister about the reason for not considering me for the Khel Ratna. He said I didn’t have enough points which is wrong. I have garnered more points than the two (Virat Kohli and Mirabai Chanu) who were nominated,” Bajrang said.

Bajrang, who won gold medals at the Commonwealth Games and Asian Games, said if he doesn’t get a favourable reply by evening, he will be forced to knock the doors of Court to get justice.

Bajrang was accompanied by his mentor Olympic medallist Yogeshwar Dutt during the meeting. “I have been wronged. I want justice. The Minister said he will look into the matter but there is hardly any time left for the award function. I will wait till evening for communication from the government’s side. If I don’t get a favourable reply by evening I will move court tomorrow,” he added. 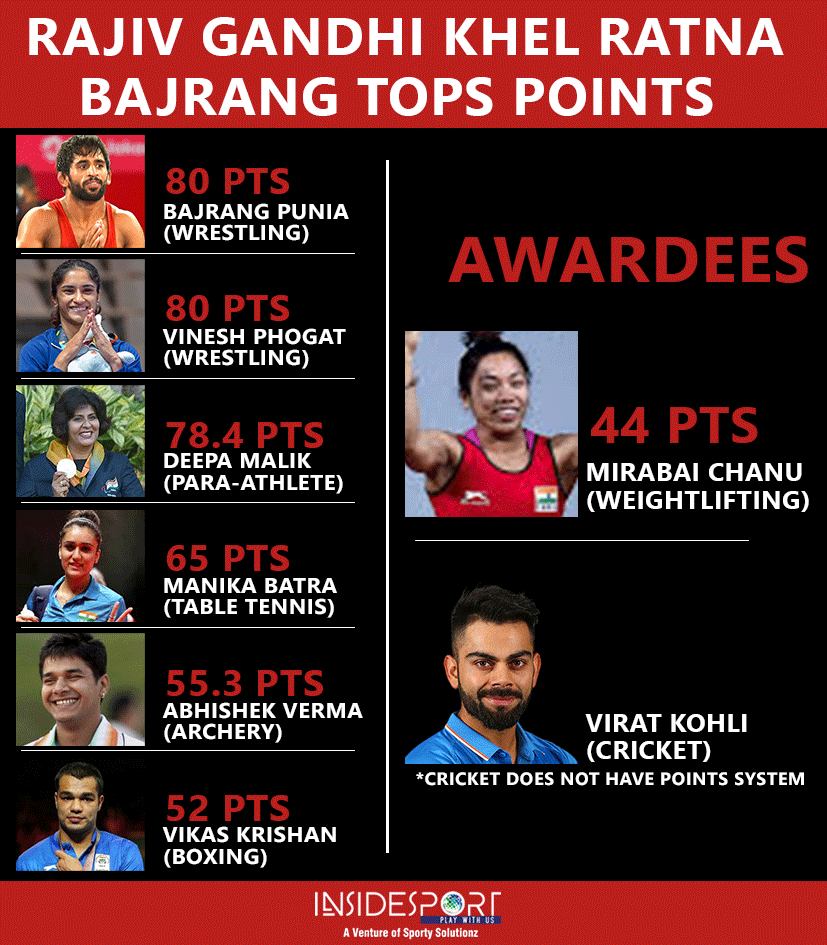 Besides gold medals at Gold Coast and Jakarta, Bajrang had won silver medals in the 2014 editions of the Commonwealth Games and Asian Games. He also has a 2013 World Championship bronze medal to his credit. But it did not come into consideration as the points system for giving away the award was introduced only in 2014. 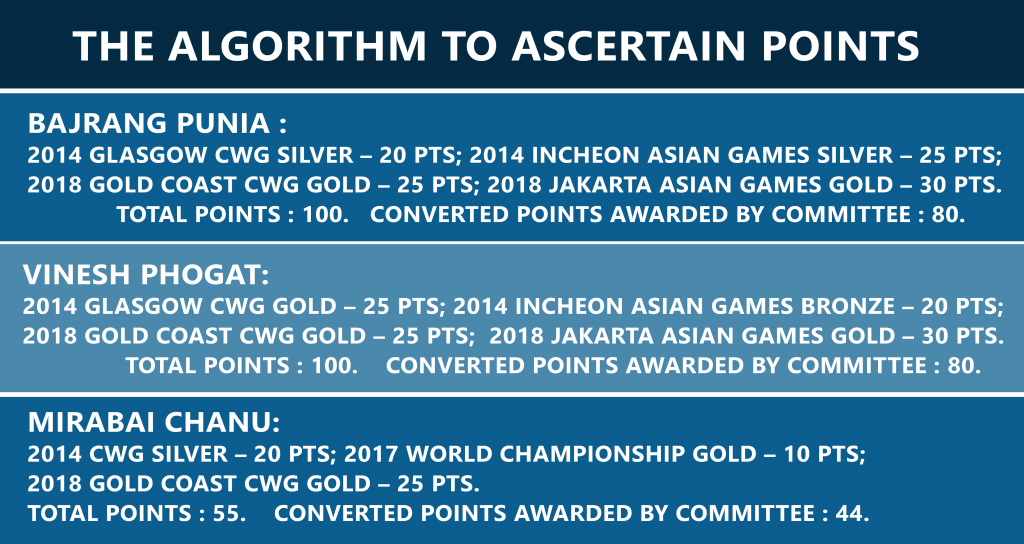 A source in the Sports Ministry said that the Minister is unlikely to make a last minute addition to the list. “The Minister met Bajrang and wanted to know his grievances. He explained to Bajrang why his name was not considered. Even though he has promised Bajrang to look into the matter, it is unlikely that any changes will be made,” the source told PTI.

This is an irony of the system that on a day, Bajrang had raised his concern with the Minister, para shuttler Raj Kumar was conferred with Arjuna Award after two-year-long court battle by the same minister. After being denied his right, Raj Kumar has taken legal route and the court had ruled to confer the award on the para-athlete.

Weightlifter Sanjita Chanu, a gold medallist at the 2014 Glasgow Commonwealth Games in the 48-kg category, too had filed a writ petition against the Ministry of Sports and Youth Affairs before the Delhi High Court following her exclusion from the list of Arjuna awardees last year.