Swiatek jumps into the end to slam a forehand winner down.

Then her hand goes to her both in disbelief. She bends down to the ground and when it finally sinks in she jumps into the middle of the court and gives some applause to the crowd. She grabs a Polish flag and heads back to the court for the formalities.

8:04 Kenin is going to have to do something pretty amazing now.It has got to happen right now.

8:02 It looks all over for Kenin, Swiatek leads 5-1 and now serves for her first Grand Slam Championship.

Swiatek can do no wrong now.

She nails a backhand winner down the line and then a forehand makes it a break to love. One game to go…

15-0 Calculative shot from Swiatek, cheeky pulls in the drop as Kenin is far off and not a hundred percent on her toes!  30-0 Magnificent on the backhand as Kenin is teeing off from this slowly.  40-0 Swiatek in cruise control! Game, Swiatek! She is two games away from history. Kenin hardly featured in this entire game on return.

7:50 : Kenin has been wearing tape on her left thigh all tournament and now she has got the trainer on to take a look at it. It does look like Kenin is limping slightly.

she has to go off-court for treatment.

Sofia Kenin looks anguished as she misses another shot. It feels like that one caused physical pain. Swiatek doesn’t let up, creeping up to mid-court to slam a forehand winner back at the American.

Kenin’s next return goes into the net and it’s a straightforward hold for Swiatek.

7:45 : Swaitek hold this time. It is 2-1 in her favor 19 year old is gaining in confidence. Not looking good for the American

Swiatek plays some sort of magic trick with her backhand – it looks nowhere near high enough to make it over the net but seems to levitate over the cord and drops immediately.

The Pole finds herself with two break-back points.

Swiatek’s first-serve percentage is down at 50%. Pretty impressive that she managed to take the first set against a player like Kenin with that.

Amazing from the 19-year-old! She is unfazed by the big stage and forces the pressure on the rather experienced Kenin who seemed squandered all over the place in the first set! Will the Oz open champion force her way back?

Swiatek is forced to defend and her backhand flies high into the sky, eventually landing just wide. On the next point, Kenin’s backhand return is genuinely so fast you’d miss it with a blink and the American breaks back.

I would describe this final as a muscle match so far.

Kenin grunts, but that doesn’t help her get the ball over the net. Swiatek will serve for the set.

She nails another lovely drop-shot and Kenin has no hope of getting there. The American then misses the chance at a big forehand winner and the teenager holds.

A couple of errors give Swiatek a chance but Kenin is pretty much back on track now.

The Polish teenager slaps the ball into the net and Kenin backs up her break with a hold.

An exciting start, but it’s all even again.

15-15 Wily on serve is Swiatek, forcing the error from Kenin who is desperate break back before it’s too late.  15-30 Spot on from Kenin as she keeps it simple with a wide return to earn the lead. Break point for Kenin!  AND SHE BREAKS! A touch shaky on serve here from Swiatek and Kenin cashes in quickly with a strong return game. No flashy stuff as she forced precise returns.

Kenin gets a tiny bit of control over the runaway train that is Iga Swiatek to take a 40-15 lead.

Her grip momentarily loosens as she leaves a ball mid-court for Swiatek to slap back at her, but the Pole then whacks the ball long and Kenin wins her first game of the match.

6:50 Swiatek is absolutely clubbing the ball. It is fantastic to see someone able to play with such freedom. Pole is running away with it Score 3-0

6:30 PM SO HERE WE ARE FOLKS, after 12 exciting days of tennis, the final two, Iga Swiatek and Sofia Kenin enter the iconic Philippe-Chatrier Stadium for the showdown!

This will be the youngest Grand Slam final by combined age since the 2008 Australian Open (Sharapova d. Ivanovic). There’s a lot to play for as a new decade unfurls in women’s tennis!

Australian Open champion Kenin meets first-time major finalist Swiatek for the Roland-Garros title @ 6.30 PM tonite.It is down to two as Australian Open champion Sofia Kenin squares off against Iga Swiatek, the teenager from Poland, appearing in her maiden Grand Slam final. Kenin, the No.4 seed, looks to add a second major trophy in 2020 following her breakthrough triumph at Melbourne Park, while Swiatek bids to cap a barnstorming run, having passed the fourth round at a major for the first time.
Here’s a closer look at the women’s final showdown.

This will be the pair’s first tour meeting, however Swiatek did beat Kenin as a 15-year-old in the third round of the 2016 junior tournament, 6-4, 7-5. The 21-year-old Kenin is a relative veteran of finals compared to the Pole, two years her junior. The Moscow-born American is 5-1 in title matches, including that win over Garbine Muguruza in this year’s Australian Open final, while Swiatek is 0-1 from her lone prior final.
Kenin vs Swiatek Live Streaming : Where the match can be won
The American has the edge in experience, especially in closing out such a huge match on the big stage.
Swiatek has not been tested yet and will carry the underdog status she did against top seed Simona Halep in the 4th round.
Kenin is a different kettle of fish though to Halep – substantially more firepower and flatter off both wings – so she will be intent on taking time away from the 19-year-old.
But she also possesses one of the most highly-strung temperaments on court. Expect the limited-capacity crowd to have the young Pole’s back and that could become a pivotal factor, should Kenin’s occasional petulance under the pump rare its head. Both women love to be the aggressor and have been impressive on serve all tournament – Swiatek having held in 78 per cent of service games and Kenin 73 per cent.
The unseeded Pole, though, will back herself to make inroads on her opponent’s serve. In her six matches she has won an astonishing 84 per cent of return games (32 of 38), while Kenin has won 49 per cent. Swiatek, too, will look to finish points more at net –having won 77 per cent to Kenin’s 56 per cent.
Kenin vs Swiatek Live Streaming : What the players said
Kenin on facing Swiatek for the first time since juniors:
“Swiatek is playing really well. She got to the final. She’s had some great wins. I’m sure she has a lot of confidence and is super excited for the final. I’m hoping that with my experience from Melbourne, it will help me for Saturday’s final.”
Swiatek on her first Grand Slam final:
“I’m going to be, like, an underdog, if you could say something about that, to the finalist. Yeah, it’s going to be a tough match… I feel like I’ve been so efficient and so focused for whole matches that I put a lot of pressure on my opponents, i think i can win.”
Where to watch FRENCH OPEN Women Singles LIVE streaming? What time Women Finals are scheduled for ?
In the Indian Sub-Continent, French Open will be broadcasted LIVE on Star Sports 2 and Star Sports Select 2. The tournament will also be streamed LIVE on Disney+ Hotstar. Other than this Tennis Fans can catch all the News Updates, Draws, Live Scores, schedules of the French Open on InsideSport.cohttps://www.insidesport.co/category/french-open/
Women’s singles will be LIVE STREAMED @ 6.30 pm IST. 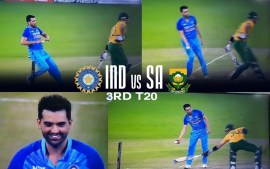