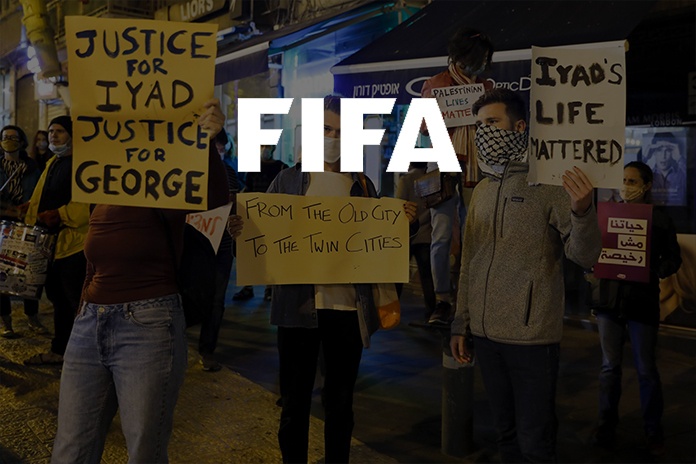 FIFA and World Athletics are among the latest sporting organisations to issue statements as ongoing protests continue in the United States following the death of George Floyd.

Floyd died on May 25 in Minneapolis with video footage showing a white police officer, Derek Chauvin, kneeling on his neck for several minutes. Floyd repeatedly said he could not breathe.

His death has prompted renewed focus on the Black Lives Matter movement, with anger centered on police killings of black Americans.

FIFA has called on leagues to use “common sense” when deciding whether to discipline footballers for displaying political messages after several players in the German Bundesliga called for justice for George Floyd during matches.

“FIFA fully understands the depth of sentiment and concerns expressed by many footballers in light of the tragic circumstances of the George Floyd case,” world football’s governing body said in a statement on Tuesday.

FIFA’s statement came after the German FA (DFB) said on Monday they were forced to investigate three Bundesliga players—Borussia Dortmund’s Jadon Sancho and Achraf Hakimi, and Schalke’s Weston McKennie—for protesting against racism and police brutality in the US due to the rules governing football around the world. The International Football Association Board (IFAB), the sport’s lawmakers, bans players from showing “any political, religious or personal slogans, statements or images”.

However, pointing to its own anti-racism campaigns, FIFA intimated that no action should necessarily be taken against Sancho, Hakimi or McKennie. “The application of the laws of the game approved by the IFAB is left for the competitions organisers which should use common sense and have in consideration the context surrounding the events,” FIFA said.

World Athletics also promoted an anti-racism message and said the governing body “stands beside our athletes and all people who are demanding change”.

They used the image of Olympic sprinters Tommie Smith and John Carlos on the podium at the Mexico 1968 Olympic Games.

The American sprinters raised black-gloved fists during the medal ceremony, which served as a civil rights protest against racial discrimination.

“Our athletes and the athletics’ family have been rocked by this so I am going to call the sport together,” said Sebastian Coe, World Athletics President.

“We must find our collective voice and practical actions.”

Japanese tennis star Naomi Osaka posted news footage of Floyd’s death and the statement: “There comes a time when silence is betrayal” as well as tweeting “Just because it doesn’t happen to you doesn’t mean it isn’t happening.” Osaka, who was born in Japan to a Haitian father and Japanese mother, later tweeted: “When you tweet about the lootings before you tweet about the death of an unarmed black man…I see people been ghost on twitter for a week when the events first started unfolding, but as soon as the looting started they sure are quick to give us hourly updates on how they’re feeling once again.”

Tiger Woods also broke his silence on the developments across the US with a statement on his Twitter account on Monday night. “I have always had the utmost respect for our law enforcement,” Woods said. “They train so diligently to understand how, when and where to use force. This shocking tragedy clearly crossed that line.”

Woods’ statement comes one day after former NBA star and current Charlotte Hornets owner Michael Jordan made his first public remarks on Floyd and the killings of black people at the hands of police. “I see and feel everyone’s pain, outrage and frustration,” Jordan said in the statement posted on the Jordan brand’s social media accounts and the team’s Twitter account. “I stand with those who are calling out the ingrained racism and violence toward people of color in our country. We have had enough.”

Meanwhile, boxing great Floyd Mayweather offered to cover the funeral expenses for Floyd. The former five-division world champion’s promotional company, Mayweather Productions, confirmed on Twitter that he had made the offer, and several local media reports have said the family has accepted.

Earlier, Lewis Hamilton, Formula One’s first black world champion who spends much of his time in America, spoke out on Instagram on Sunday. “I see those of you who are staying silent, some of you the biggest of stars yet you stay silent in the midst of injustice,” wrote the Mercedes driver.

Stand for George : Lewis Hamilton slams F1, the ‘white dominated sport’ for its…

Hamilton’s statement prompted other F1 drivers to join him in messages of solidarity. “Racism is toxic and needs to be addressed not with violence or silence but with unity and action,” Renault’s Daniel Ricciardo wrote on Instagram.

“I still struggle to find the words to describe the atrocity of some videos I’ve seen on Internet. Racism needs to be met with actions, not silence,” Ferrari’s Charles Leclerc tweeted.