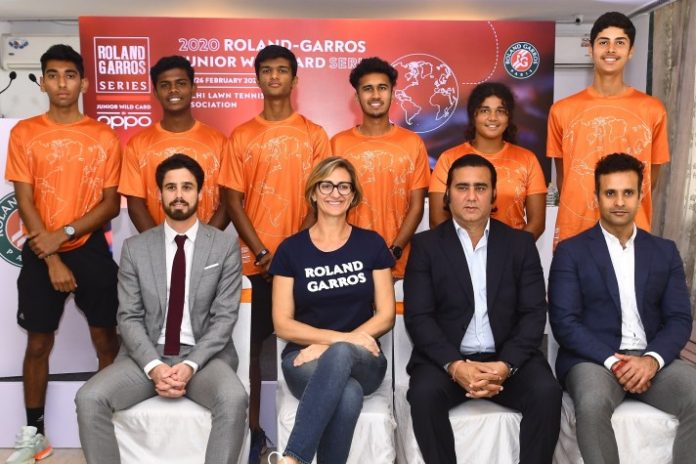 Four-time Grand Slam champion Mary Pierce was left impressed by the plucky display of the 16 Junior players battling it out at the Roland-Garros Junior Wild Card Series, held at the Delhi Lawn Tennis Association (DLTA). The second day of the tournament witnessed some nail-biting games as the players fought hard to reach the finals and grab the coveted spots at the Junior Roland-Garros Qualifiers in Paris.

Top-seed Dev V Javia registered yet another clinical win as he defeated Nitin Singh 6-2, 6-1, to set up a final showdown with Chirag Duhan. 3rd-seed Duhan also cruised to the final after winning 6-1, 6-0 against Mohit Bondree. In the Girls’ Semi-Finals, the unseeded players put on spirited performances to knock out the two top seeds. Vaishnavi Adkar played out of her skin to make a memorable comeback and defeat 2nd-seed Akanksha Nitture 3-6, 6-3, 7-5, while Sanjana Sirimalla defeated top seed Reshma Maruri in straight sets 6-4, 7-5. The finals will take place tomorrow and the two winners will then travel to Paris to play against their counterparts from Mexico, Brazil and China, in a bid to qualify for the main draw of the Junior Roland-Garros Championships, states a Press release.

The tournament’s brand ambassador Mary Pierce was on the side-lines watching the day’s events unfold. “I am delighted to be back in India, watching the junior stars of Indian tennis in action”, says Pierce. “I know from personal experience the crucial role Junior tennis plays in improving the game of budding players and laying a solid foundation for their careers. I am quite impressed by the standard of the game I have seen so far. This reaffirms my belief that India has real potential to be a tennis power-house in the future.”

Speaking on the occasion, Lucas Dubourg, the head of international development of the FFT says, “Exposure of playing on clay is vital for well-rounded development of budding players. Hence, we are proud to bring this competition to India for its 6th edition and give these talented players a chance to hone their skills. This tournament has also played an important role in growing the popularity of the Roland-Garros Championships across India over the past few years.”

Echoing this sentiment, AITA President Praveen Mahajan says, “This is arguably the most important tournament on the Junior tennis calendar in India. Our association with Roland Garros has been instrumental in producing many talented Junior players who have gone to do the country proud at the international level. We are confident that this edition will also unearth some promising talent for the future.”

The Roland-Garros Junior Wild Card Series is jointly organized by the All India Tennis Association (AITA) and the French Tennis Federation (FFT) organisers of Roland-Garros, the world’s premier clay court tournament. It is a testament to the collaborative efforts by both organisations to promote the game, particularly clay-court tennis, at the grassroots level in India.