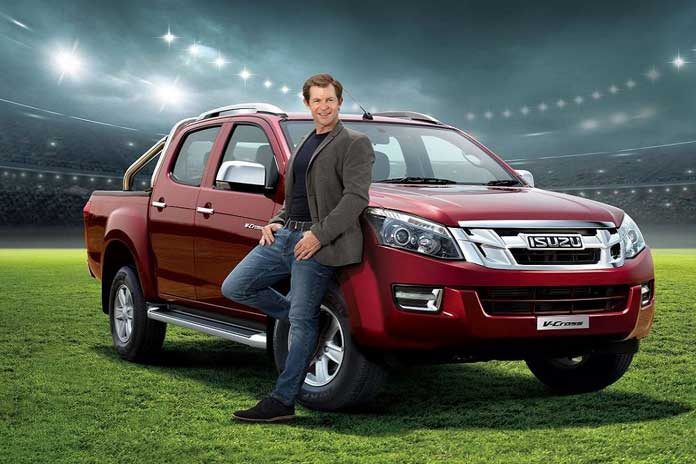 Jonty Rhodes will promote Isuzu Motors and its V Cross vehicle in the Indian market. The Japanese car manufacturer has announced the brand endorsement deal with Jonty Rohdes.

Isuzu motors, Japanese car manufacturer, has signed former South African cricketer Jonty Rhodes as the brand ambassador to promote the brand and its latest product V-Cross in India. The brand will complete six years on 21 August 2018 in the Indian market.

Isuzu has launched its latest commercial, featuring Jonty Rhodes, underscoring the message ‘Be the Game Changer’ at a Press conference in Mumbai yesterday (Thursday).

Isuzu Motors India deputy managing director Ken Takashima said, “Jonty perfectly represents the brand’s values and his association encapsulates what we intend to do in this country. Jonty Rhodes, an internationally known sportsman, brings with him unique qualities that differentiated him as a ‘game-changer’ in the international cricket. The V-Cross, lifestyle and adventure pick-up, has been a catalyst in bringing about a new lease of life to the people and adventure enthusiasts in India. The Indian pick-up market is growing significantly and we have been witnessing a strong inclination towards the V-Cross. We are happy to have carved a niche in the Indian utility vehicle market. We are thrilled and excited to associate with Jonty and I am sure this will make the brand and the V-Cross even more exciting and aspirational in the days to come.”

The company began its manufacturing operations in April 2016 in Sri City, spread over an area of 107 acres in Andhra Pradesh.

Also Read: With Parineeti on board, swimwear brand Speedo targets 50 stores in India

The brand has brought the lesser used term pick-up in trend with their lifestyle and adventure pick-up, Isuzu D-MAX V-Cross. Isuzu has establishing itself rapidly as an important player in the Indian pick-up and utility vehicle market. The association brings together a distinct combination of ISUZU’s thrust on ‘Never Stop’ philosophy and Jonty’s strategy and excellence of being ‘game-changer’ in the world of Cricket.

Isuzu Motors India VP- service, customer care, EA and PR J Shankar Srinivas said, “A lot of people are well travelled in this country. At the time of launch we didn’t have to convince the adventure enthusiast and the off-road communities much. With a predominant commercial pick-up segment already prevalent in this country, we needed a prime mover and found out that there is no lifestyle pick-up in this country that was really catching on.”

In terms of marketing and promotions the brand is primarily focussing on TV advertising. The company’s total investment outlay is ₹ 3,000 crore, the company has stated in a Media release.

According to Srinivas, the Indian market is certainly a tough market when it comes to convincing a customer about the value of a product in terms of pricing because Indians are the best negotiators in the world.

According to the Society of Indian Automobiles Manufacturers (SIAM), the pick-up trucks is the fastest growing and the largest segment (by volume) in the commercial vehicle market in India. It has grown from 81,622 in 2011-12 to 255,599 in 2017-18.