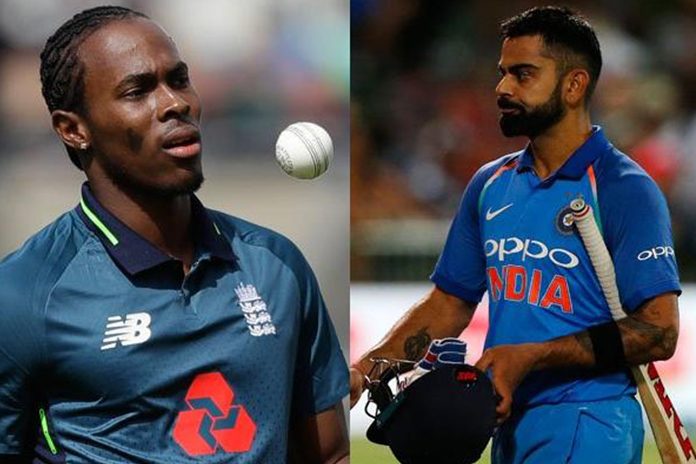 Jofra Archer will be England’s “x-factor” in the upcoming World Cup because of his “very different” skill-set reckons India skipper Virat Kohli, who himself is a target of the Barbados-born pacer.

Archer has played only three ODIs but has been an asset on the T20 circuit with his death bowling, which is expected to pose problems for visiting sides.

“He is probably going to be their X factor. He holds a skill-set that is very different from the rest. He can generate a lot of pace and he is just a great athlete. I am sure England is delighted to have him. It would be exciting to watch him in the World Cup,” Kohli said at the official ICC press conference for the captains.

Archer, who had an impressive IPL for Rajasthan Royals, recently made his international debut, and has world’s No 1 batsman’s wicket on his wish-list.

He recently said that he is eyeing Kohli wicket in World Cup.

“Jofra saying that is a big compliment because he himself is a world class bowler. The way he has come up in the last couple of years, I have seen him in the IPL, there is a good reason why he has been fast tracked into playing for England in a tournament like World Cup,” the Indian skipper added.

However Kohli at the same time, made it clear that he is hardly bothered about a bowler’s goal.

Kohli also praised the talented Rashid Khan, saying that it was the first time during the recently concluded IPL that he could read the Afghan’s deliveries, sitting in the RCB dug-out.

“He (Rashid) has been outstanding with his skills sets and pace on the ball is the key. Variations are really subtle and he doesn’t give you any time on the ball, let alone flight the ball and before you realise it hits the bat or through the pads and you get bowled or lbw or stuff like that,” said Kohli.

What Kohli likes most in Rashid’s bowling is his fast-bowler like aggression.

“He brings that fast bowler like intensity as a spinner, which is rare to see. I love competitive guys and his attitude is absolutely outstanding. When he bowls well, you want to sit and watch him bowl. He will be very important for Afghanistan.”

The Indian skipper admitted that losing a home series 2-3 to Australia was a humbling experience and also showed that how self belief trumps everything else even when a team is in dire straits.

“If a team on a given day gets together against a very experienced side and they believe that they can win, then they can. I think that is what we learnt from that series loss.

“We were 2-0 up and we thought we would definitely win but they showed more passion, more character and more determination. They enjoyed every moment. We took a lot of learning from the series. In this World Cup, the team needs to have that passion and determination to win,” he concluded.