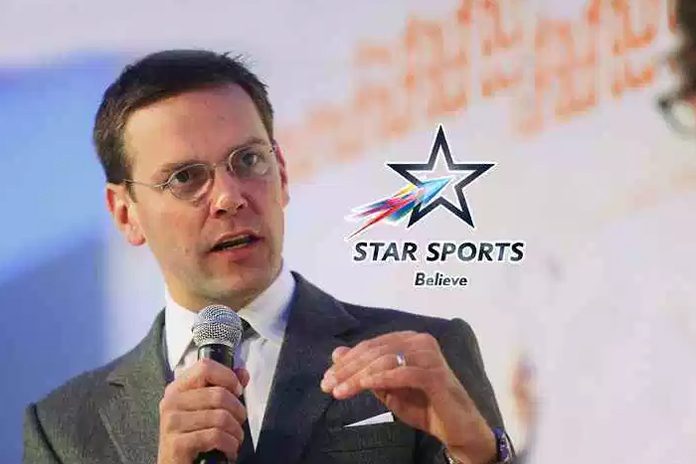 The Indian Premier League debut on Star Sports is on top among the very satisfying factors at the Star India network for James Murdoch. The 21st Century Fox (21CF) CEO has also lauded the strength of Star India sports business.

James Murdoch has confessed that he is very satisfied  – both from the monetisation as well as performance perspective – with the Indian Premier League (IPL) debut on the Star network. He has backed his claims with statistics to show the IPL growth on Star in comparison to the league broadcast on the rival Sony Pictures Networks India until a year ago. “The tournament (has seen) almost 30% increase in viewership over last year in the target audience on TV. Average match reach and engagement has increased by double digits to 15% and 13% respectively,” Murdoch stated.

“We also saw the IPL increase the viewership on our mobile platform Hotstar. To give you one data point, 10.3 million concurrent viewers watched the IPL final match which was the most concurrently watched digital event in the world ever. The IPL was very successful for us and the advertising returns were very strong and the monetisation there across the board. The impressions that were delivered by the IPL was so much higher than what Sony delivered with its previous ownership of it,” broadcast news portal televisionpost.co has quoted James Murdoch as saying.

Murdoch is pleased with the Star India performance, even when he agrees that Star India business might not have hit the $500 million EBITDA target in FY18. “With respect to the TV business target of $500 million, we got there…thereabouts. Obviously, we made a big investment in Hotstar platform and it comes through in our international cable members. We are really pleased with the growth,” Murdoch has said.

The 21st Century Fox CFO John Nallen, meanwhile, has said that the company’s international cable revenue increased 25% led by advertising growth of 55% and a 12% increase in reported affiliate revenue in Q4. The sharp increase in ad revenue was led by the successful debut of IPL tournament on Star Sports, he added. He also said that the reported international EBITDA increased 53% led by higher contributions from both Star Sports and its entertainment business. Nallen also noted that the P&L results generated over $2 billion cash from operations in Q4 and $4.2 billion for full-fiscal. “This is 21CF’s strong cash generation result ever,” he declared.

He also guided that there will be a cost increase during the Q4 FY19 due to ICC Cricket World Cup broadcast on Star network.

Meanwhile, the Walt Disney chairman and CEO Robert Iger has said that Star India will play an important role in Disney’s global growth strategy. Disney is in the closing stage of completing the $71 billion acquisition of 21st Century Fox assets which includes the whole of Star India and 30% stake in Tata Sky.

Iger, according to televisionpost.co has noted that Disney’s global growth strategy will be well served by the international properties in the Fox portfolio including Fox Networks Group and Star India.

The Fox Networks Group International’s 350 channels reach consumers in 170 countries whereas Star reaches 720 million viewers a month across India and more than 100 other markets. “And as you know, Fox also has a significant stake in Sky, the most successful pay television company in Europe. The addition of these valuable assets will greatly enhance our position as a global entertainment company with excellent production and distribution businesses in key and emerging markets around the world,” Iger is quoted as saying.

Iger is confident that the Fox acquisition will help Disney to compete very well against the likes of Netflix in its direct to consumer (DTC) strategy. The company will get 60% shareholding in video streaming service Hulu courtesy its acquisition of 21CF.

“We’ve always believed we have the brands and content to be extremely competitive and to thrive alongside Netflix, Amazon, and anyone else in the market. And adding the Fox brands and creative assets such as Searchlight, FX and National Geographic to Disney, Pixar, Marvel, Lucasfilm, and ABC, will make our DTC products even more compelling for consumers,” he said.

He had words of praise for 21st Century Fox’s various divisions like FX and National Geographic. Iger revealed that Disney will provide even more resources to support FX’s existing business and to further invest in FX as a brand and as a critical supplier of original content for our DTC platforms.