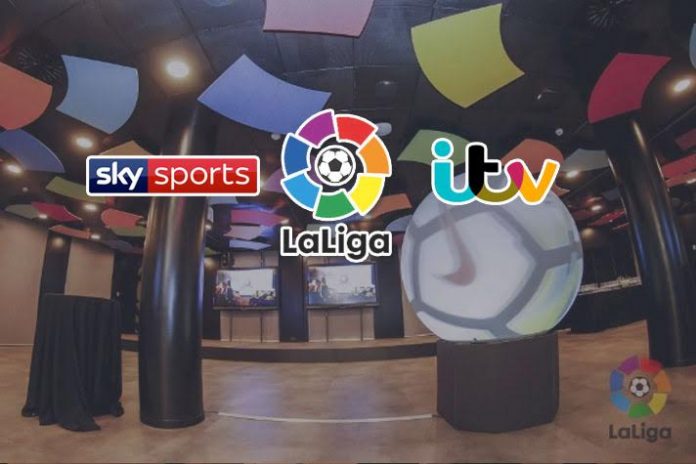 LaLiga has roped in ITV to broadcast its select games in England for the first three weekends of the Spanish top flight on free to air TV in the UK and Ireland. But in a setback to LaLiga , Sky will not be bidding for the ‘Secondary Rights’ of LaLiga .

According to reports, pay TV network Sky Sports has adopted a policy to go for original entertainment content over European football.

Meanwhile, ITV beginning with the opening fixture on Friday 16th August, where champions Barcelona travel to the San Mames stadium to face Athletic Bilbao, the British broadcaster has committed screen one game from the opening three match days.

The deal gives LaLiga some extra time to find a broadcaster for the rest of the season, after no satisfactory bid was forthcoming from the initial rights tender, which was sent in July.

Last year, ITV showed Spanish football on free to air in the UK for the first time after Eleven Sports lost exclusivity in its distribution of the league, and will again show Barcelona and Real Madrid matches over the next three weekends.

La Liga’s preferred mix of media rights holders included a combination of over-the-top (OTT), free-to-air (FTA), and pay-TV operators, which it had in place for the latter stages of last season between ITV, sports streaming platform Eleven Sports, and pay-TV channel Premier Sports, Sportspromedia has reported.

There was interest in La Liga’s regional tender, with Eleven Sports, which had to give up an exclusive three-season deal with La Liga just months after signing it in May 2018, and Premier Sports both keen.

While a deal with ITV offers La Liga more time to negotiate a longer and more lucrative deal, it seems the league is limited for choice with audiences in the UK showing increased interest in a diverse range of genres over and above sport when choosing their pay-TV subscriptions.

It is thought that the strategic thinking behind Sky’s prior long-term relationship with La Liga has now drastically changed.

According to UK broadcast researcher Enders Analysis, Sky, now owned by the US media giant Comcast, has for the past year signalled an intent to cut back on peripheral sports rights deals, while it ramps up spending on original content and drama series.