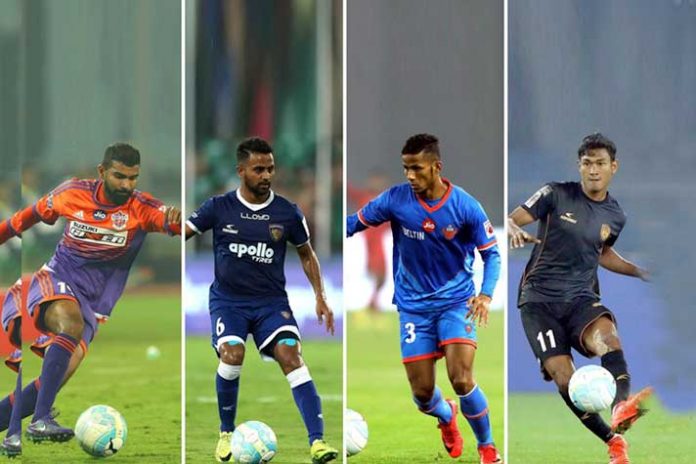 The Indian Super League clubs have already started gearing up to strengthen their squads for the upcoming 5th season (2018-19) of action-packed Indian football extravaganza.

With the transfer season now in full swing, some of the Hero Indian Super League (ISL) clubs have wasted no time in looking for options to bolster their squads ahead of the upcoming campaign. According to the ISL official report from ISL, season 5 will be the first time that the ten clubs would be provided with the opportunity to sign players through the transfer window, instead of the conventional draft system.

The Delhi Dynamos FC and Chennaiyin FC have been the busiest so far, completing a host of signings to rebuild their ranks. Alongside them, Jamshedpur FC, Kerala Blasters FC, ATK and Bengaluru FC have joined the party as well. Here, we take a look at all the deals that have taken place since the commencement of the transfer window.

The content below has been obtained from the official write-up form the Indian Super League.

Chennaiyin not resting on their laurels

The defending champions are looking to build on their success from the 2017-18 season and have made a total of three signings so far. The Marina Machans have signed custodians Sanjiban Ghosh and Nikhil Bernard, alongside youngster Sinivasan Pandiyan. Ghosh joins Chennaiyin after spending a season with Jamshedpur FC, where the 26-year-old served largely as an understudy to Subrata Paul.

Bernard, on the other hand, joins the side after previous stints with Hero I-League sides Gokulam Kerala FC and Ozone FC. The 28-year-old goalkeeper put in some impressive performances during the 2018 Hero Super Cup and will be hoping for time between the sticks with Chennaiyin.

Pandiyan signed on a three-year deal, after plying his trade for Chennai City FC in the previous season. The midfielder enjoyed an impressive season with the Hero I-League side, where he made a total of 17 appearances.

Delhi Dynamos looking for a resurgence

After a poor 2017-18 campaign, the Dynamos will be hoping to bolster their fortune in the upcoming season. The Dynamos have signed a total of five players so far, that includes, Daniel Lalhlimpuia, Siam Hanghal, Bikramjit Singh, Rana Gharami and Narayan Das.

Forward Lalhlimpuia penned a two-year deal with the Lions after spending three seasons in Bengaluru FC colours. The former India U-19 captain is a bright prospect and will undoubtedly give Delhi the much-needed firepower in attack.

Bikramjit Singh with his experience and Siam Hanghal with his creativity are talented recruits who are sure to play vital roles in the middle of the park. Bikramjit had a fantastic season with the Hero ISL champions, while Hanghal was appreciated by many for his year-long stint with Kerala Blasters FC.

Alongside them, to give their defence depth and power, the addition of Narayan Das from FC Goa and Rana Gharami from Mohun Bagan will ensure a solid foundation at the back.

Jamshedpur add to their steely resolve

After an impressive debut season, Jamshedpur seem to be in search of adding depth to their defence line. Centre-back Dhanachandra Singh has been prized away from Chennaiyin on a year-long deal. The veteran defender was a regular during his time with the champions and will provide some much-needed experience.

Raju Gaikwad, formerly of Mumbai City FC, has also joined the defensive ranks of Jamshedpur. The 27-year old, who is a long-throw specialist, will add strength in numbers to the backline and look to bring his mastermind into play.

Shrewd business from the Kerala Blasters

The Blasters have been quite active in this transfer window, completing a couple of high-profile signings. Halicharan Narzary, who has been one of NorthEast United FC’s most pivotal figures for the last three seasons, completed the transfer to Kerala. The forward had an impressive stint with India during the Hero Intercontinental Cup and will serve as a key figure for David James’ men in the next campaign.

However, one of the biggest signings of the window has been Anas Edathodika, who joins the Blasters after a successful stint with Jamshedpur. One of the best defenders in the country, Edathodika will join hands with his partner-in-crime Sandesh Jhingan at the heart of the backline. India’s best defensive duo is sure to be a sight to behold when they take the field.

Another signing for the Yellow Brigade has been India’s U-19 FIFA World Cup custodian, Dheeraj Singh, who is sure to have a lot of expectations riding on him.

ATK looking to get their groove back

Two-time Hero ISL champions ATK have wasted no time in the transfer window, adding the likes of Kalu Uche and John Johnson to their squad. The Kolkata-based side, who recently appointed Steve Coppell as their head coach, had a dismal run in the 2017-18 campaign, when compared to their previous lofty standards, and will look to get back on track with a record third Hero ISL trophy in season 5.

Nigerian forward Uche had an outstanding individual season with Delhi Dynamos, scoring 13 goals in 15 games. Johnson also enjoyed a remarkable campaign with Bengaluru, who made their league debut in last season. The English centre-back was a crucial component to the Blues’ defence, registering a total of 86 clearances and 23 blocks in 18 appearances.

Bengaluru yet to play all their cards

Given the depth of their squad, the Blues have not made much of a splash in the transfer window. Their only signing so far has been Kean Lewis from FC Pune City. Lewis has had previous stints with the Delhi Dynamos before moving on to join Pune. The forward made seven appearances for the Stallions during the 2017-18 season and will be looking for more minutes on the pitch with Bengaluru.