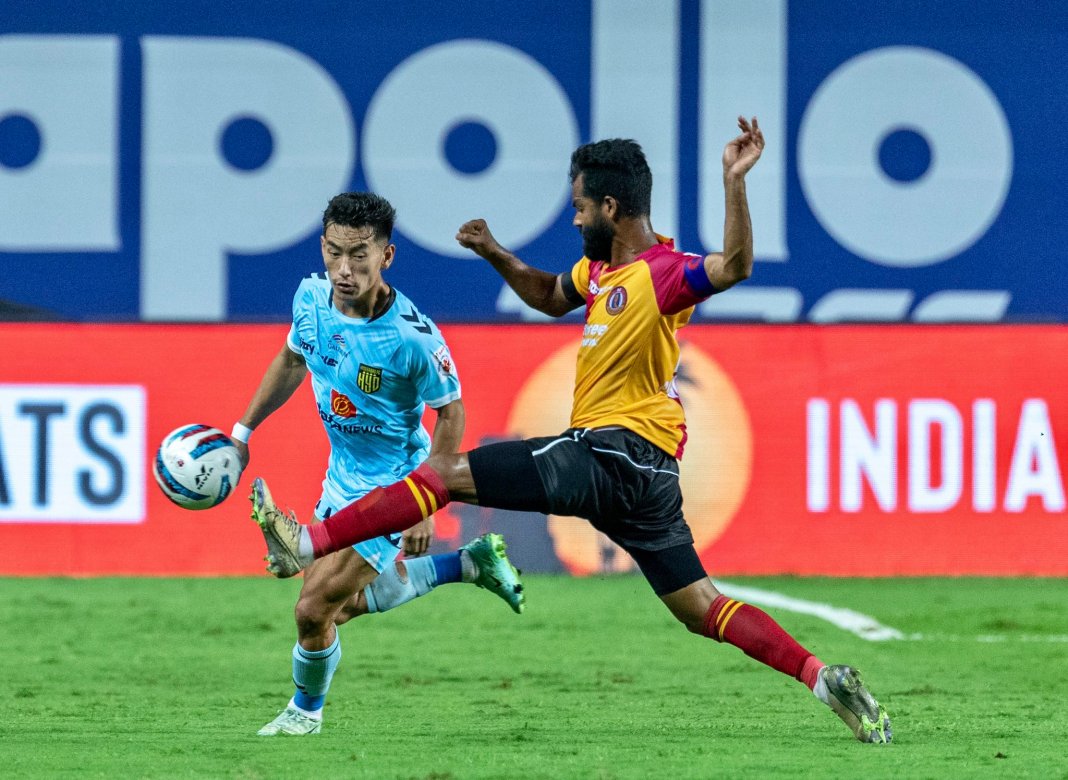 HFC beat SCEB in ISL 2021-22: Hyderabad FC reclaimed the top spot in the 2021-22 Hero Indian Super League (ISL) standings with a dominating 4-0 win over SC East Bengal at the Tilak Maidan Stadium, here today. Follow all the ISL 2021-22 LIVE Updates only on InsideSport.IN

HFC beat SCEB in ISL 2021-22: Bartholomew Ogbeche (21’, 44’, 74’) scored a sensational hattrick to extend his lead in the goalscoring charts. Aniket Jadhav (45+1’) also got on the scoresheet for the Nizams. The result takes them to the top of the table with 20 points, ahead of Kerala Blasters FC on goal difference.

Joao Victor tested Arindam Bhattacharja from a free-kick early into the game following a strong start by the Nizams. The goalkeeper was called into action a few more times later after having to make saves from Sauvik Chakrabarti and Aniket Jadhav. However, the custodian could not keep the ball out for long as Bartholomew Ogbeche’s header escaped his grip and landed inside the net for the first goal.

HFC beat SCEB in ISL 2021-22: SC East Bengal gave a better account of themselves after the drinks break in the first half. They almost scored the equaliser but a save from Laxmikant Kattimani and a goal-line clearance from Joao kept the lead intact. At the stroke of the 41st minute, HFC doubled the lead after a comedy of errors by SCEB defence allowed Ogbeche to weave past the goalkeeper and score with ease.

Aniket Jadhav then added more misery by scoring the third after a couple of minutes. His low shot from the left flank found the bottom-right corner and the Nizams went into the halftime break with a three-goal advantage.

Marcelo Ribeiro made his debut from the bench in the second half as the Red & Gold Brigade tried to find a breakthrough. However, it was HFC that scored the fourth as Ogbeche finally got his first hattrick of the season at the stroke of the 75th minute. Javier Siverio’s shot deflected into the Nigerian’s path who made no mistake in slotting the shot into the back of the net.

HFC beat SCEB in ISL 2021-22: SCEB had a penalty awarded after Ribeiro was tripped inside the box but the spot-kick was saved well by Kattimani who correctly guessed Franjo Prce’s attempt. The Nizams kept their clean sheet intact for the remainder of the match and secured important three points.

Hyderabad FC face Odisha FC in their next fixture at the Tilak Maidan Stadium on Thursday while SC East Bengal awaits a stern test of ATK Mohun Bagan in the Kolkata Derby at the PJN Stadium on Saturday.