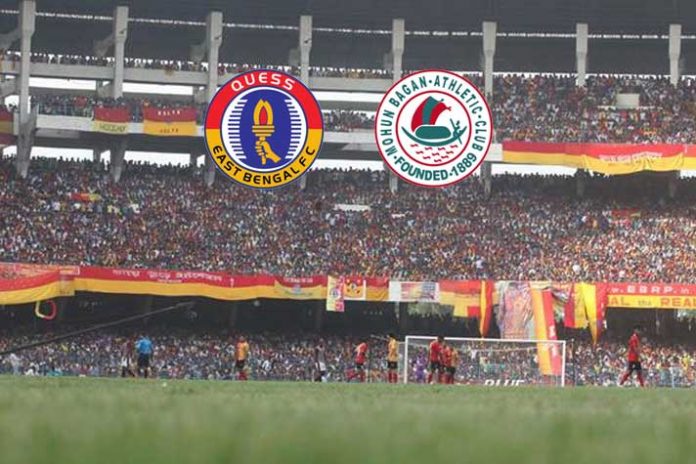 Earlier this season, ATKMB bested the Red & Golds 2-0 to begin a new chapter in the club’s history. But overall, East Bengal has a lead of 127-111 in 353 meetings over the last 100 years. Other 115 matches ended in draws. But considering the new entity (ATKMB), the Green & Maroons have taken a 1-0 lead.

But this time, ATK Mohun Bagan are a champion side and have continued their form taking the top spot in the league with 36 points from 17 matches. East Bengal on the other hand are struggling in their debut season, languishing at ninth place with 17 points from as many games. But even though the derby is not being played in Kolkata and the stats are heavily favouring the Mariners, it will once again be one of the most-watched football games in India. With that, let’s find out some of the biggest derby moments.

In one of the worst days of Mohun Bagan’s history, the Mariners suffered a humiliating 0-5 defeat to city rivals in the IFA Shield final in 1975. It was the biggest margin of win in the derby and through that East Bengal stamped its authority over Bagan. It was also the highlight of East Bengal’s dominance during the ’70s when the club claimed six consecutive Calcutta Football League titles.

In recent times, it was one of the heated derby matches. With both goalkeepers having torrid times, the attackers flew high. Within the first 10 minutes, East Bengal took the lead through Nirmal Chhetri but six minutes later, Edeh Chidi restored parity. The match ended in Mohun Bagan’s favour with a 5-3 scoreline. The Nigerian striker went on to score four goals, equaling the record of Bhaichung Bhutia who was the only player to score a hat-trick in the derby until then.

At the iconic Saltlake Stadium, considered as the Mecca of Indian football, the match between East Bengal and Mohun Bagan soon erupted into chaos, madness and violence. After East Bengal took the lead through Harmanjot Khabra in the 43rd minute. But soon, Bagan’s striker Odafa Okolie was sent off and sent the situation spiralling out of control.

The unruly crowd, from Mohun Bagan, threw a missile (brick) towards the referee but it hit their own man Syed Rahim Nabi’s face. He had to be hospitalised at half time. But it gave Bagan an opportunity who refused to field players in the second half, fearing players’ safety. The police had to disperse the unruly crowd.

With Mohun Bagan needing a point to win the National Football League title in the last match of the season, they faced East Bengal. But Bagan, heavy favourites to win the title, were bundled by East Bengal 3-1 as the Red & Golds marched on with the title, finishing the league a point ahead. East Bengal with 46 points from 22 matches while Bagan finished second with 45. That did not go down well with Bagan supporters, who took to streets, burning club emblem and flags in anger.