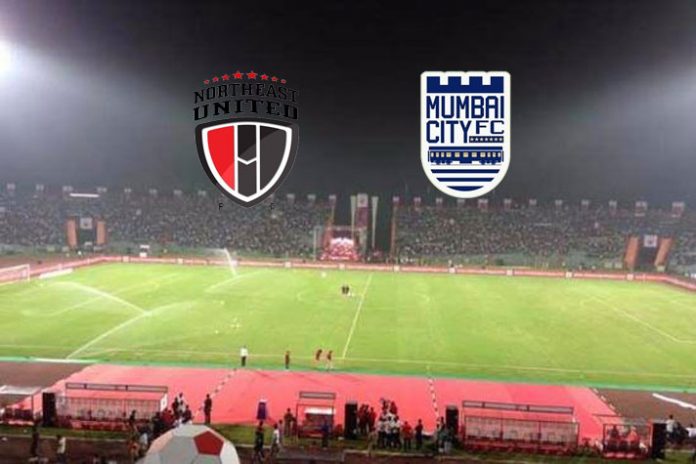 North East United have an opportunity to scale up to the number two position in the Indian Super League Season 6 points table as they host the struggling Mumbai City FC at the Indira Gandhi Athletic Stadium in Guwahati on Wednesday (today evening) evening.

A defeat, on the other hand, can potentially push the currently fifth-placed North East United out of the top half of the 10-team league.

In their overall ten meetings to date, Mumbai Indians have scored six wins over North East United, who have won only three and the other one has ended in a draw. However, the current form takes precedence over the past. This season, the Mumbai City FC has been struggling and placed in the eighth position after four outings. They have won only one and lost two. After the winning start, the team had lost their touch, played out a draw in their next and lost the last two games.

Mumbai City FC though will draw strength from the fact that their key players are back from injuries. Rowllin Borges, Modou Sougou and Mato Grgic will be at coach Jorge Costa’s disposal going into the crucial match.

The coach remains optimistic that his team will bounce back. “We have started exactly like last year. Last season in the first four games we had four points. We started well and then we had some problems. I have full confidence in my players. They know what they have to do, and I know what I have to do. We have an important game and we want to get three points,” the coach said on the eve of the must-win tie.

“The conditions are perfect for my players to play. In Mumbai, it is too hot and too much humidity, but then again, we have to be prepared to play under all circumstances. But if you ask me, I prefer to have this kind of weather,” he added.

In contrast, the hosts have NorthEast United have not been conquered in any of the four outings this season. Their Croatian coach Robert Jarni is pleased with the outcome so far and will be looking to up the ante at home against the Mumbai City FC.

The hosts besides the crowd support, also into the match as favorites purely on the two team’s current form.

NorthEast will head into the match as favorites as they are still unbeaten this season. Mumbai City FC, on the other hand, will be under pressure to overcome successive defeats in their last two matches.