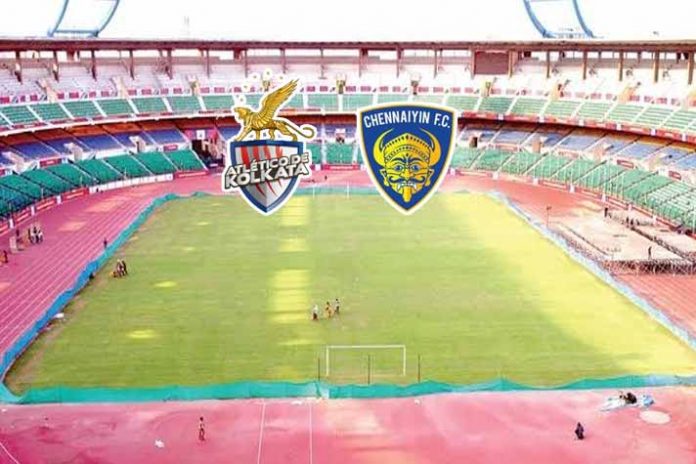 Two former Indian Super League champion teams Chennaiyin FC and ATK in a clash of former champions in an ISL game at the Marina Arena in Chennai on Wednesday. The hosts will be eyeing their first win of the ISL Season-6.

The Kolkata outfit will be upbeat as they are coming off a 5-0 thrashing of Hyderabad FC at home on Friday last.

Chennaiyin FC, to their credit have bounced back from 0-3 hammering at the hands of FC Goa in the opener, to pick up its first point following a goalless draw against Mumbai City FC on the Diwali day (Sunday).

Though Chennai FC kept a clean sheet, head coach John Gregory would be concerned with the fact that the defence appeared shaky at times. Also, he would be hoping that the forward line gets cracking and finds the net.

It was a night of missed opportunities as Chennai FC and Mumbai City muffed chances with the former getting a lion’s share of attempts.

Brazil’s attacking midfielder Rafael Crivellaro and Anirudh Thapa created several chances against Mumbai City and the coach will expect him and Maltese striker Andre Schembri to deliver in the games to come, starting with the one against ATK.

Chennai FC have showed improvement from the game against FC Goa, but they would need to do well with regard to finishing and control the midfield more if they need to make an impression against Antonio Lopez Habas’ ATK.

It is the defence that will worry the CFC coach as captain Lucian Goian didn’t look at his best in the Mumbai game and the onus would be on him to marshal the backline.

CFC’s lanky Lithuanian forward Nerijus Valskis said the team should have scored against Mumbai, adding they were probably unlucky.

He expressed the hope that he would get a start on Wednesday (against ATK) and be part of a win.

However, Habas is not taking CFC lightly and said the Blues were a ‘dangerous team’. “(Chennaiyin are) dangerous. I dont know Chennaiyin now, but I remember them from the past. Chennaiyin is a strong opponent,” he said.

“I absolutely respect the opponent, the coach, the players and the fans of Chennaiyin,” added at the press conference in Kolkata on Monday prior to the team’s departure to Chennai.

Habas would be happy with the way with ATK played against Hyderabad, but will want to team to maintain the intensity against CFC.

The CFC-ATK match promises to be an interesting tussle as both teams look to gain early momentum in a long season.